Dubai is producing some of the best hotels in the world at a rate like when mushrooms pop in the forest after extensive rain.

At the peak of Palm Jumeirah island - a set of artificial islands built to shape a palm tree - one of the most awaited hotel debuts is about to happen.

The iconic Atlantis The Palm has a sister hotel called Royal Atlantis Resort & Residences. Located close to the original, the second Atlantis project will reshape the city's skyline.

Kerzner Group is behind the $1.4 billion project that features a distinctive design consisting of two towers connected by a bridge.

It looks like giant Lego blocks that make up the structure. This unique concept had already won many awards before it opened.

One side of the tower consists of privately owned apartments, while the other is where the hotel offers 795 rooms, with 10 to 12 on each floor. 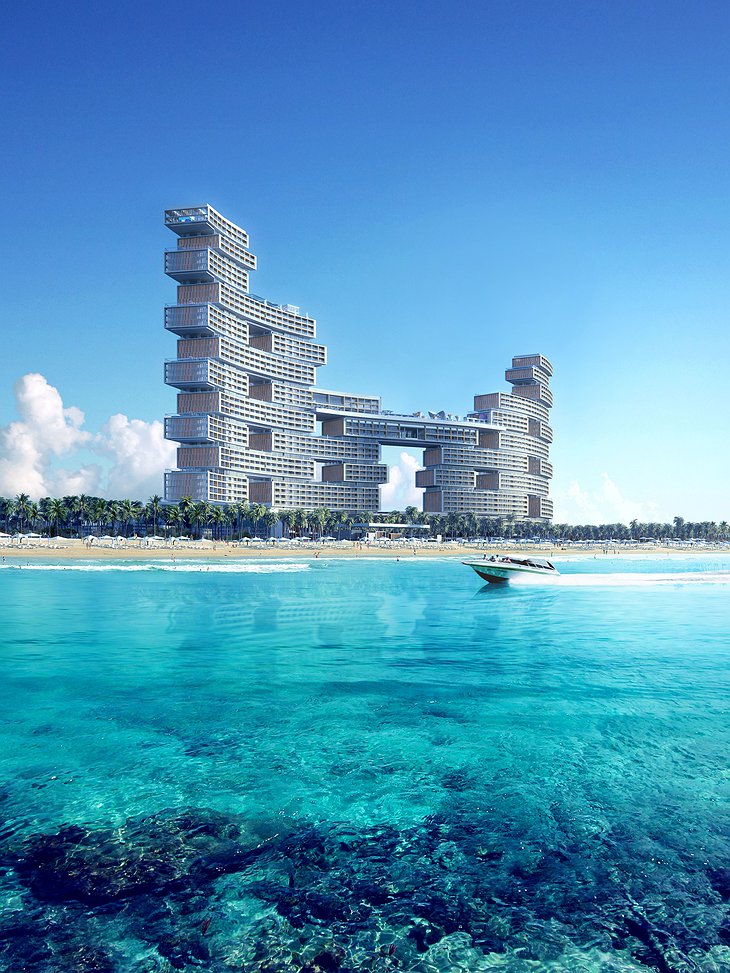 Adjacent to the iconic Atlantis The Palm, the new resort spans 63 hectares (about 155 football fields). 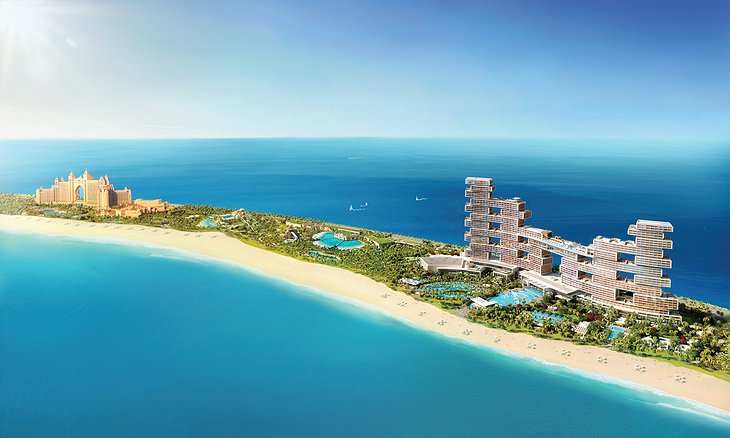 The 1.2 miles (2 kilometers) long private beach is the longest in Dubai.

The stretch of sandy beach with a beautiful panorama was made possible by connecting it to the existing part of Atlantis The Palm with the new. 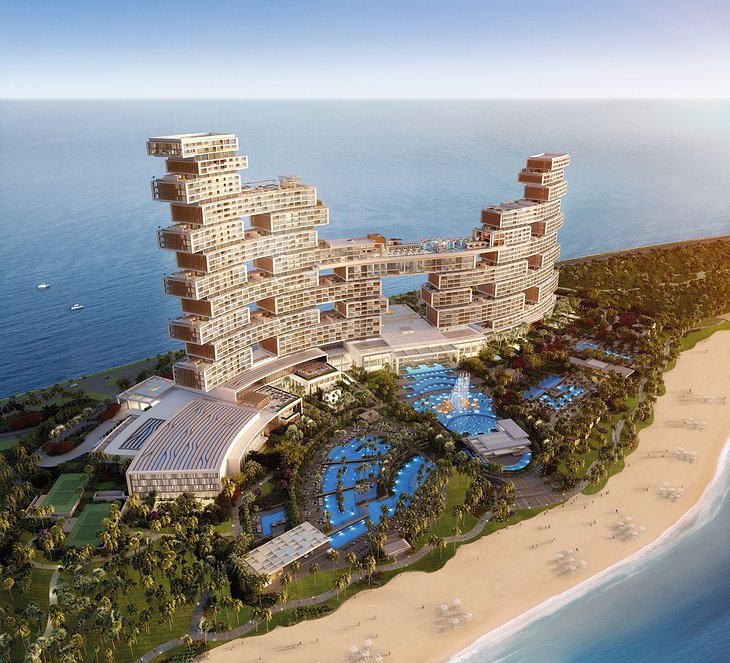 The central piece of the outdoor pool area is a massive fountain - even by Dubai standards. There is a dazzling fountain show every day.

The music was written exclusively by the Oscar-winning composer Hans Zimmer, so a unique experience is guaranteed. 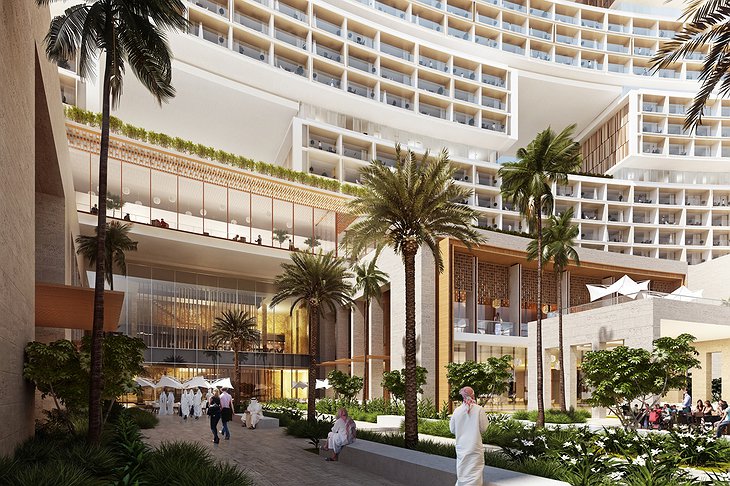 The new Atlantis hotel has set an ever higher bar for luxury than the original Atlantis The Palm. 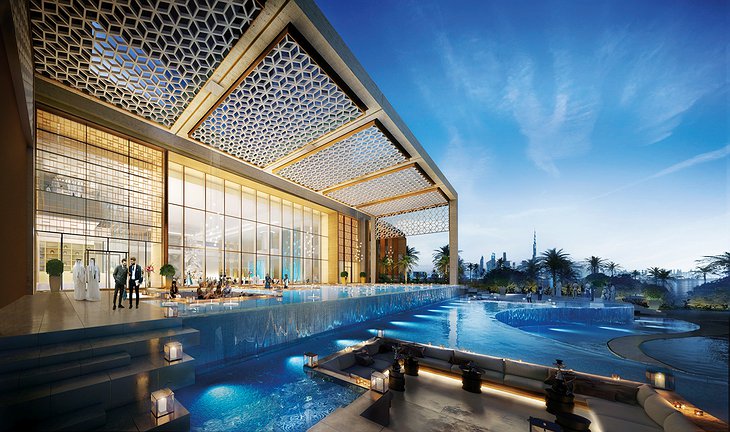 The lobby is home to the world's largest jellyfish tank with over 2,000 specimens. And that's just one of three aquariums in the lobby alone. 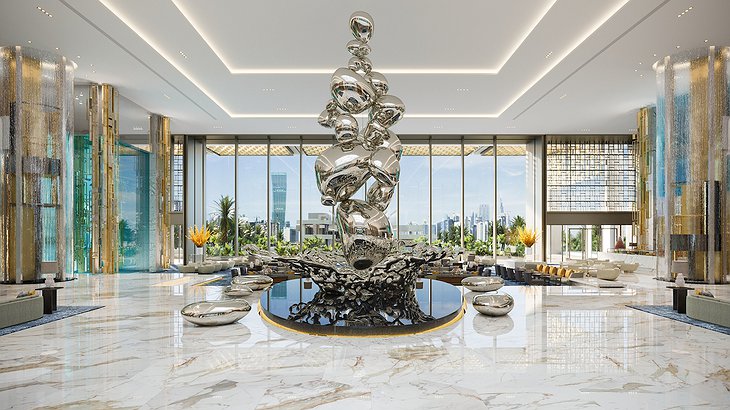 WET is responsible for the mind-blowingly creative water and fire installations throughout the resort.

You will see giant walls filled with fire and water flaming and flowing together when you enter the lobby. 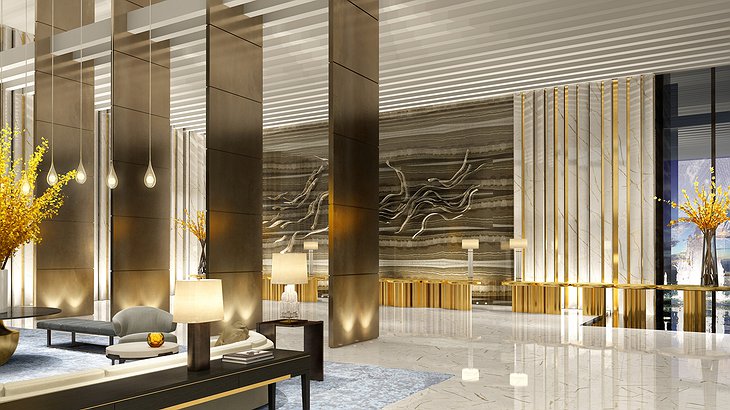 The seemingly impossible feat is repeated all around the hotel. For example, the SURGE­ is a cascade of water splashing onto a pool with flame eruptions. 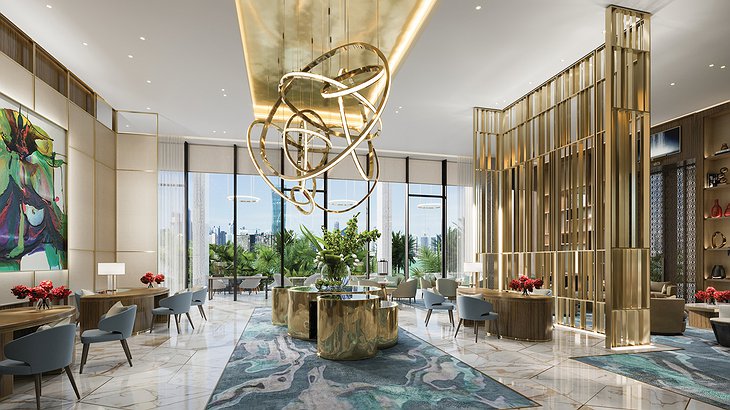 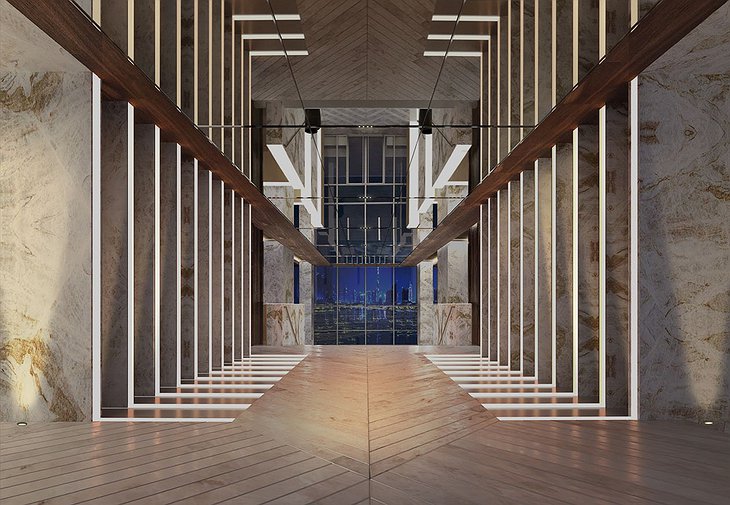 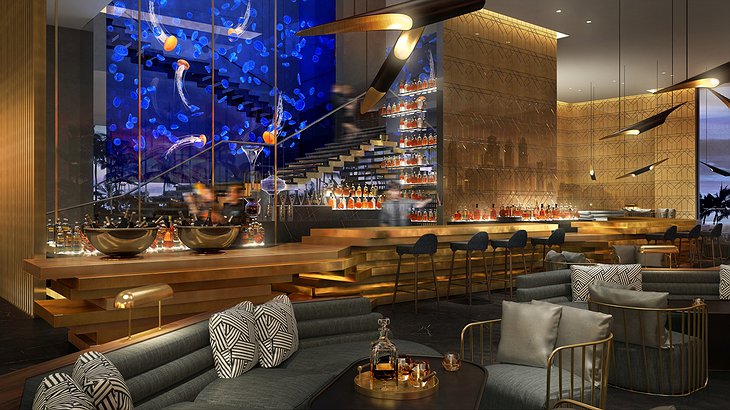 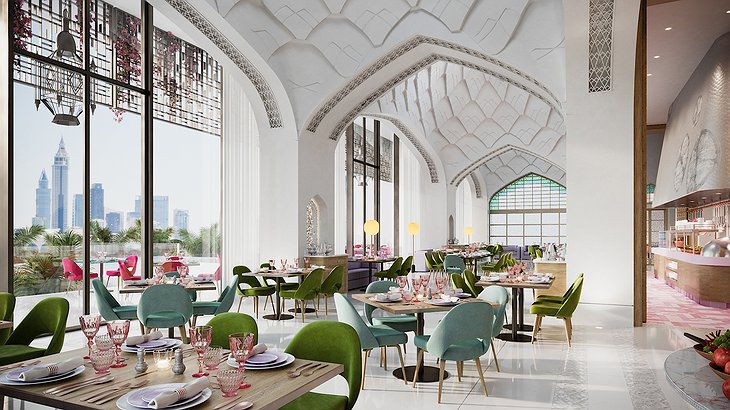 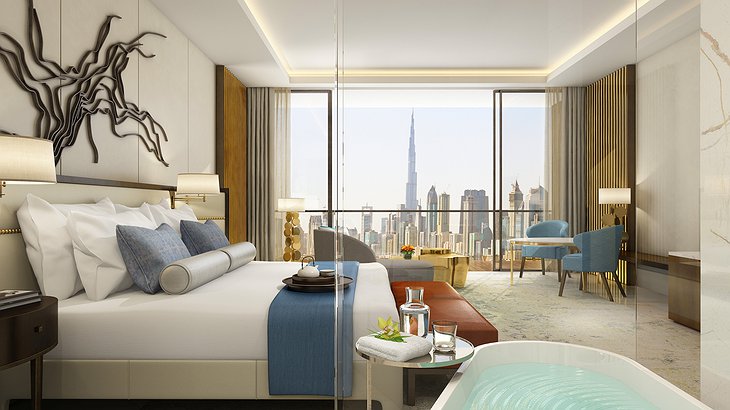 The hotel is located in the west wing and boasts 795 guest rooms. Among them are 693 ocean and palm rooms, 96 suites, and six signature suites. 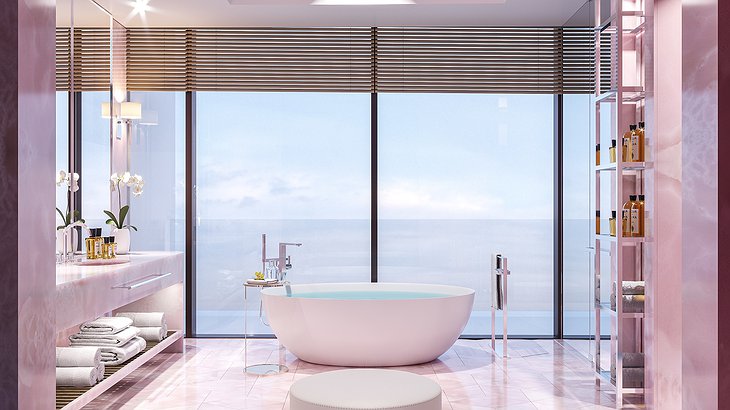 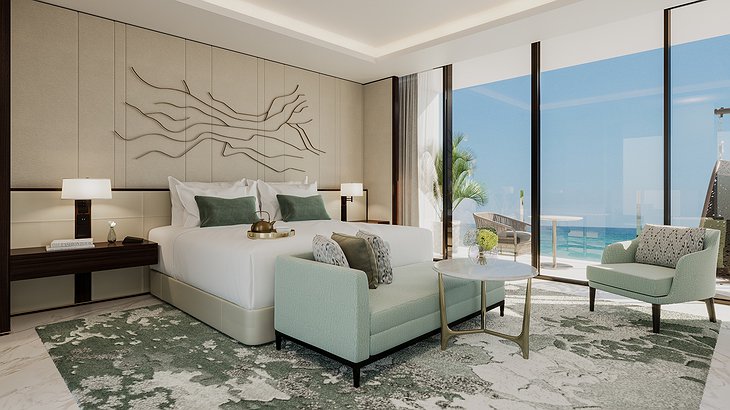 Views from the Sky Pool are of the Dubai city skyline on one side and the Arabian Gulf on the other. 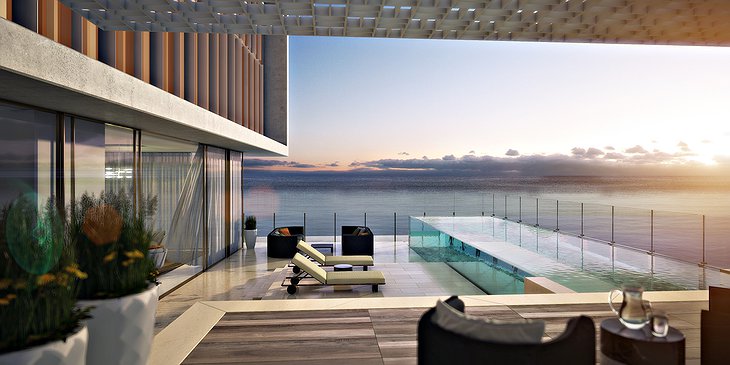 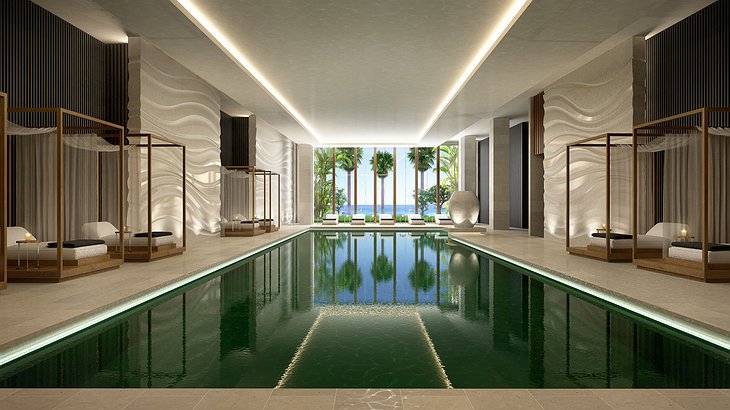 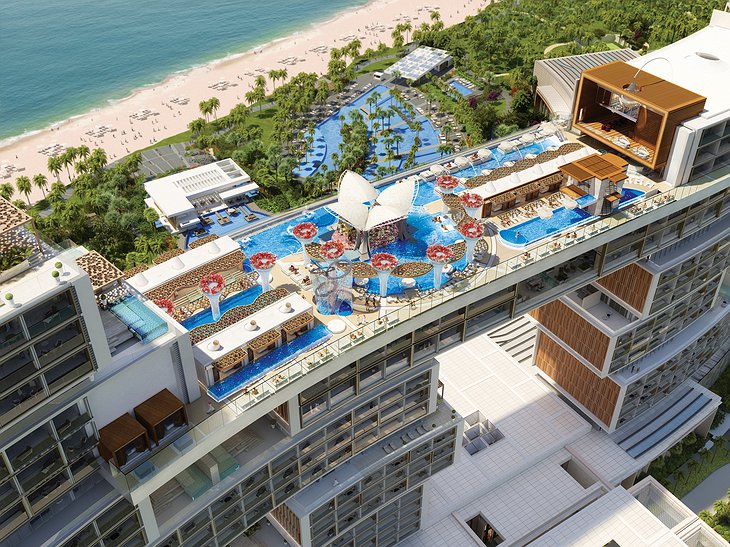 295 feet long (90m) infinity pool is 315 feet (96 meters) above sea level, and the surrounding area on the 22nd floor is equipped with comfy cabanas.

You don't have to worry about crowds, as the hotel has a daily limit of 140 people. 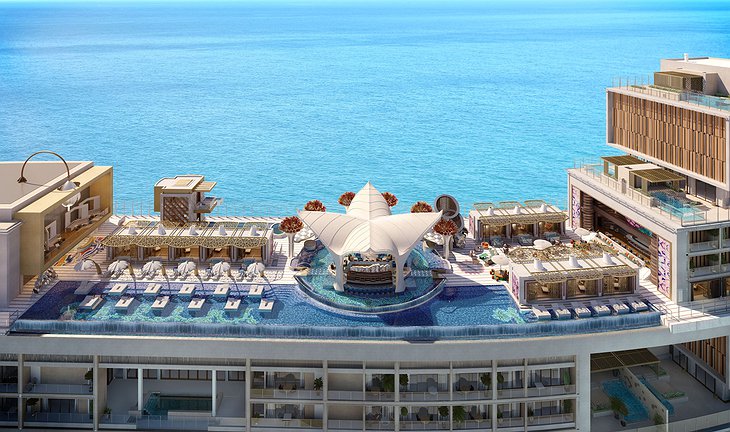 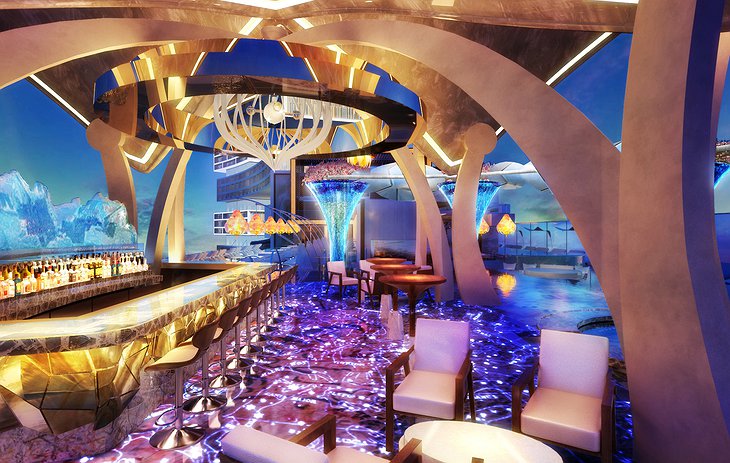 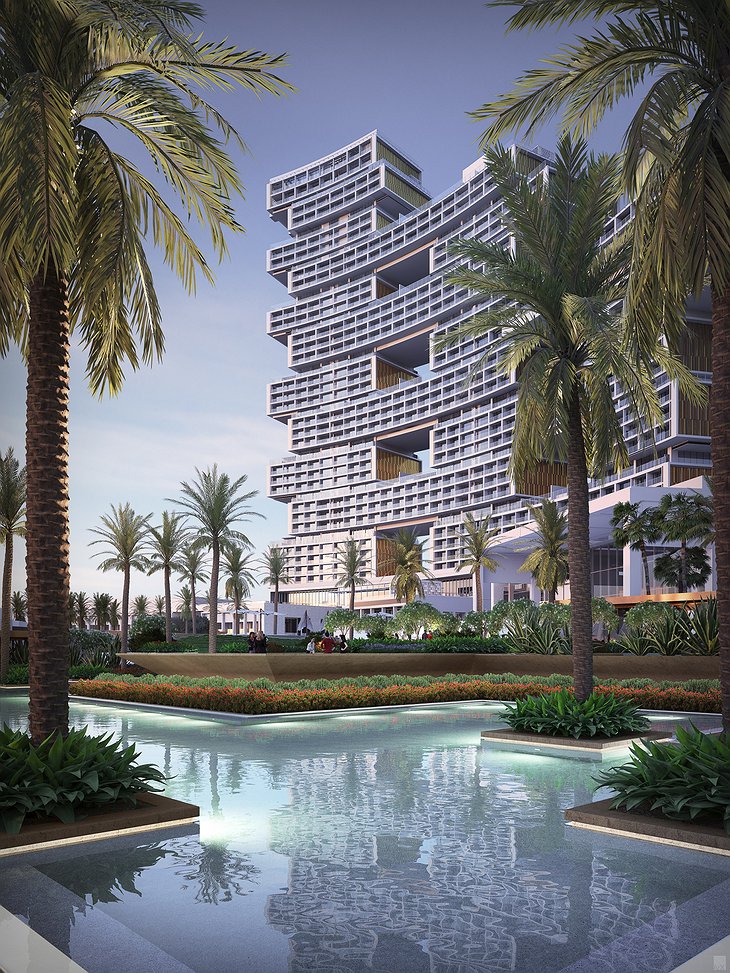 Noby by the Beach 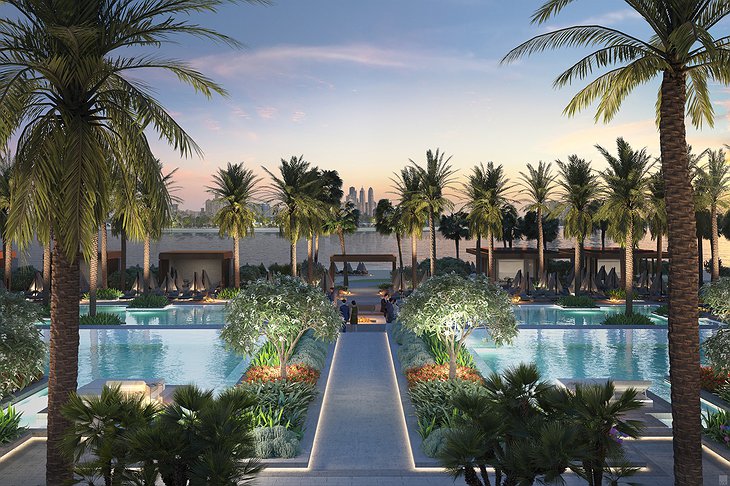 Aquaventure became one of the biggest waterparks in the world in 2021 when the action-packed 157 feet (48 meters) tall Trident Tower opened, taking the total number of attractions at the waterpark to 105. 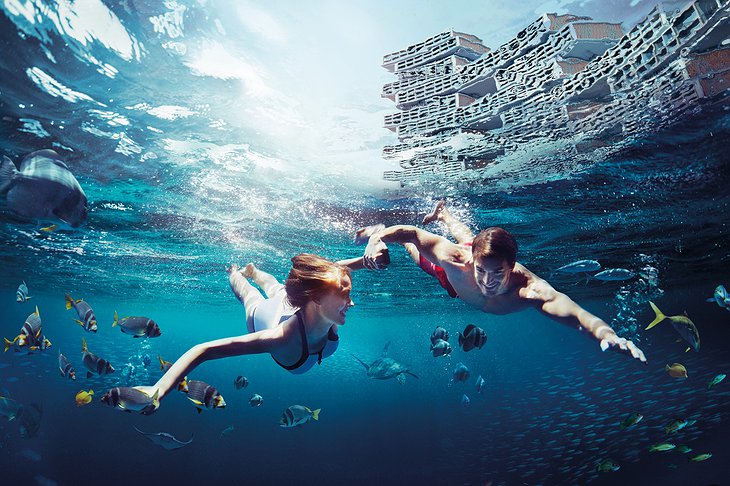