You might have guessed it from the name: this hotel is for all the geeks out there. Referring to Albert Einstein's famous equation, EMC2 is an art-and-science-themed hotel “geared toward both left- and right-brained guests” for a unique experience.

The concept behind EMC2 was inspired by Northwestern Chicago, where the hotel is located. As the hotel’s creator and project developer Scott D. Greenberg explained, “I thought about this area, next to Northwestern, the research labs and medical school, and all this technology. I wanted a concept that would speak to that.”

The public spaces resemble a crossover of an Art Deco interior and a science lab. There’s a Felix Guyon’s zoetrope in the reception that guests can set in motion, lights suspended by cords attached to weights and pulleys, and an impressive collection of jars and tubes in the restaurant. But with all the science-inspired décor, the interiors don’t feel cold or sterile. Quite the opposite, EMC2 is a welcoming and playful space, inviting guests to explore.

The turn-of-the-century décor in the rooms is stylish and goes well with stunning downtown Chicago views out your window. But don’t be mistaken: you’re still firmly in the 21st century here. The phonograph speakers are powered by smartphones, every room is equipped with Alexa, and the room service is performed by two robots, Cleo and Leo. This is a truly past-meets-future space. 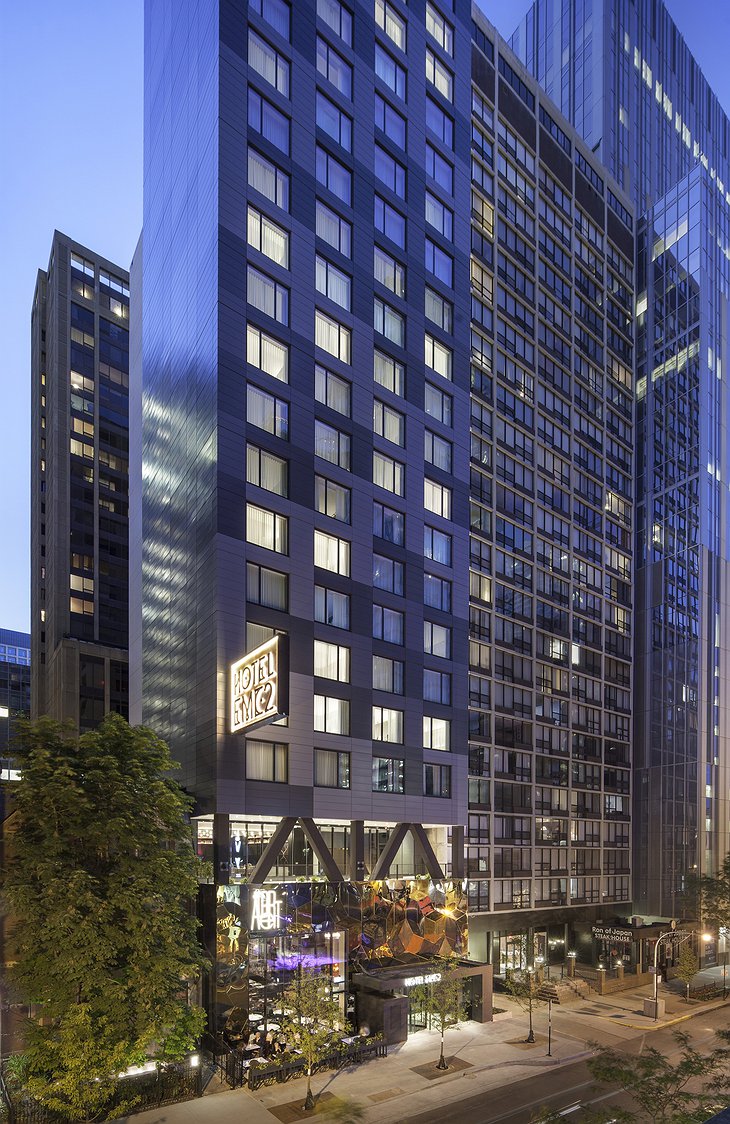 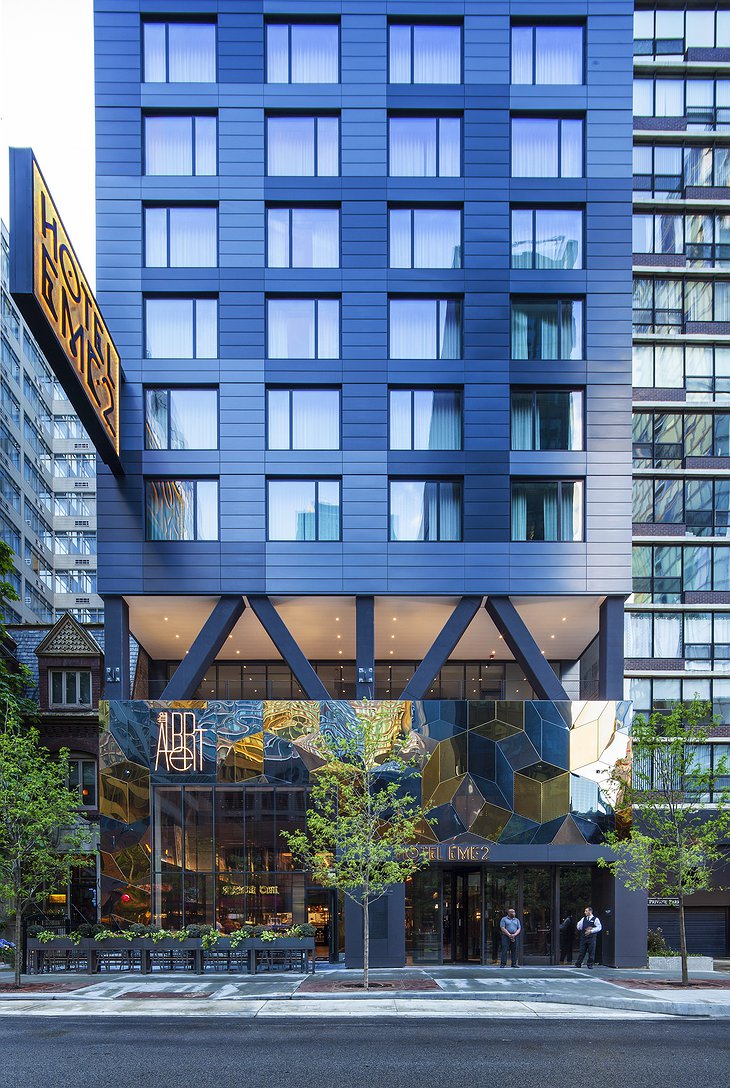 Scott Greenberg, a Chicago hotelier, and science nerd, decided to pay homage in Hotel EMC2 to the untold story of Emmy Noether, who helped Einstein with his Theory of Relativity. The artworks featured throughout the property highlight Noether’s work. 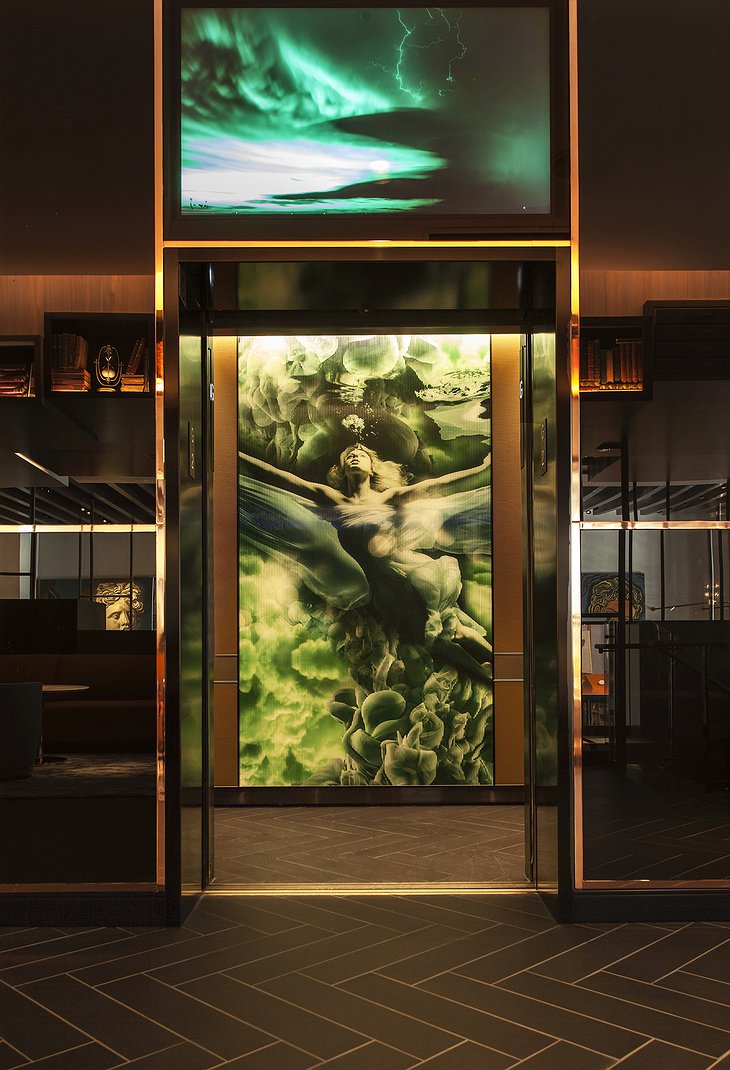 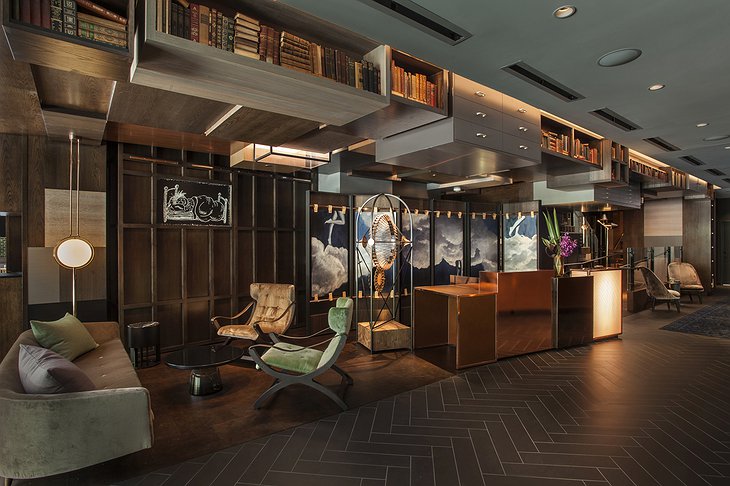 The Albert Restaurant pays homage to one of the greatest mind's ever lived on Earth, Albert Einstein. It offers an innovative fusion of classic and progressive dishes from morning till dinner time among thousands of books decorating its interiors. 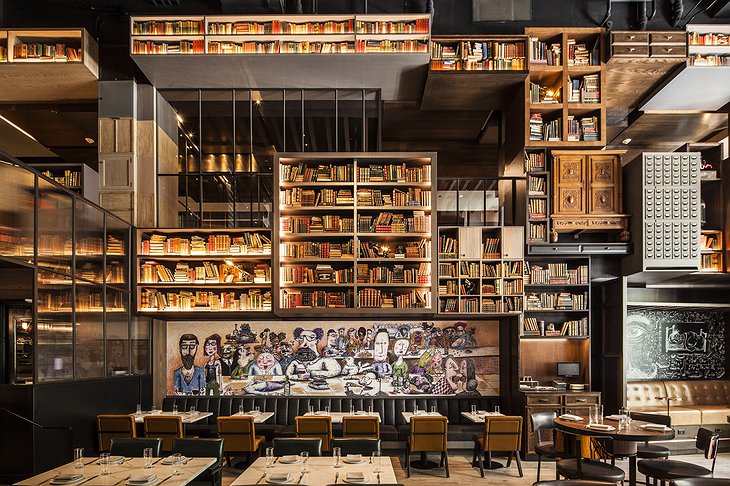 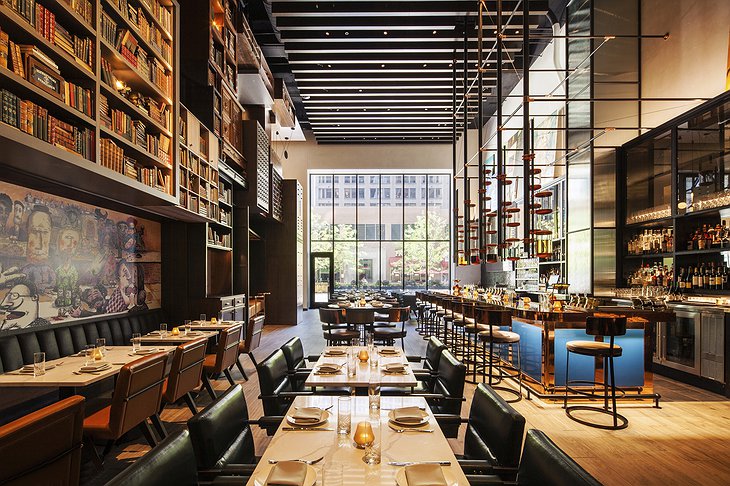 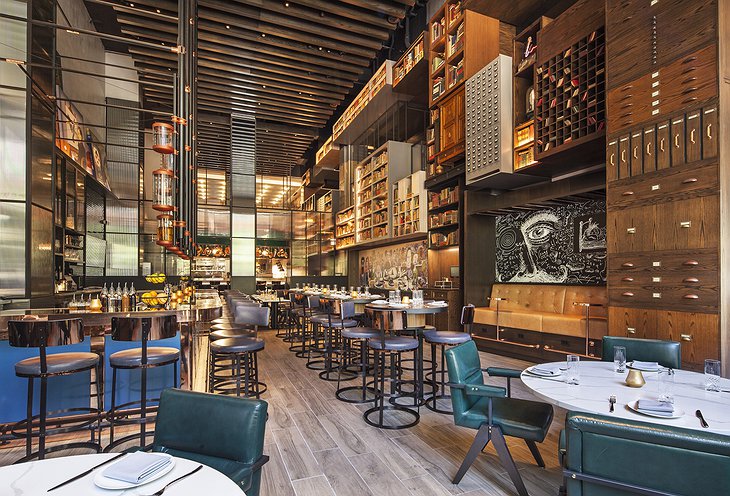 The Queen, Double Queen, and King rooms ensuite bathroom's glass walls can be enclosed by thick curtains unless you are more than comfortable with your partner. 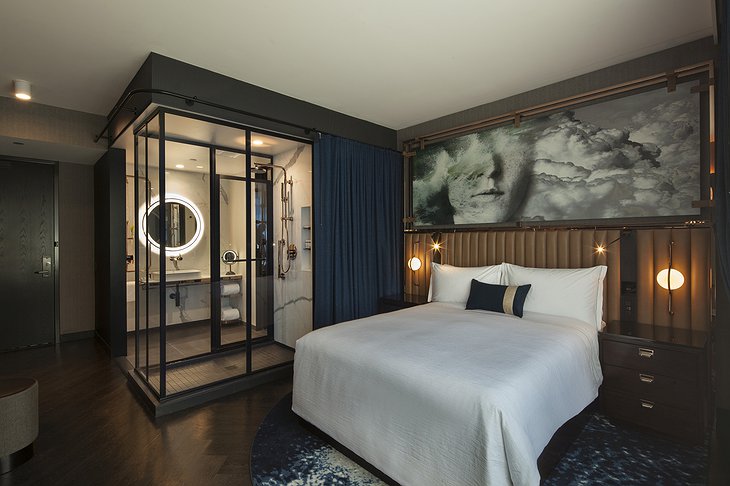 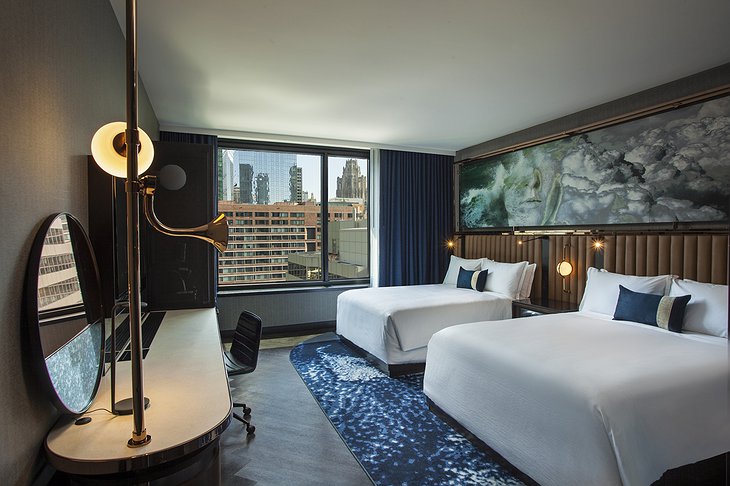 All rooms have stylish fusion décor of vintage and modern elements, and some have a scenic view of Chicago's Streeterville. 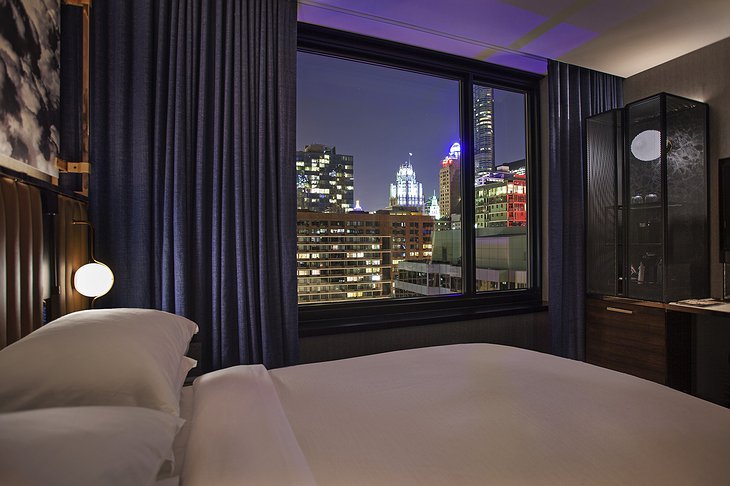 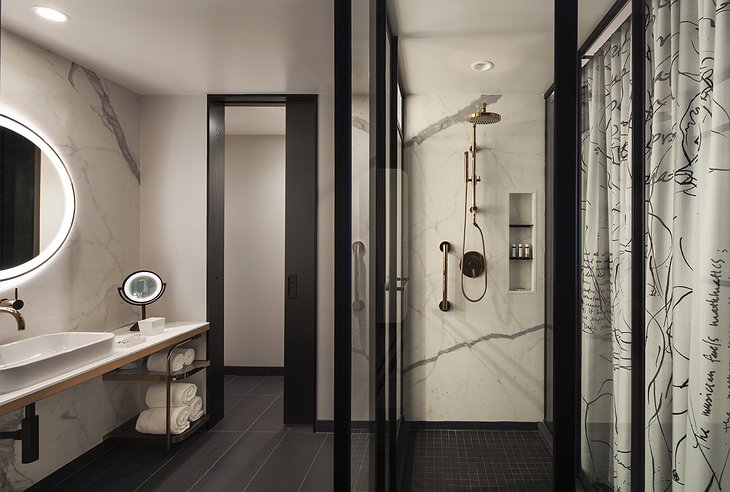 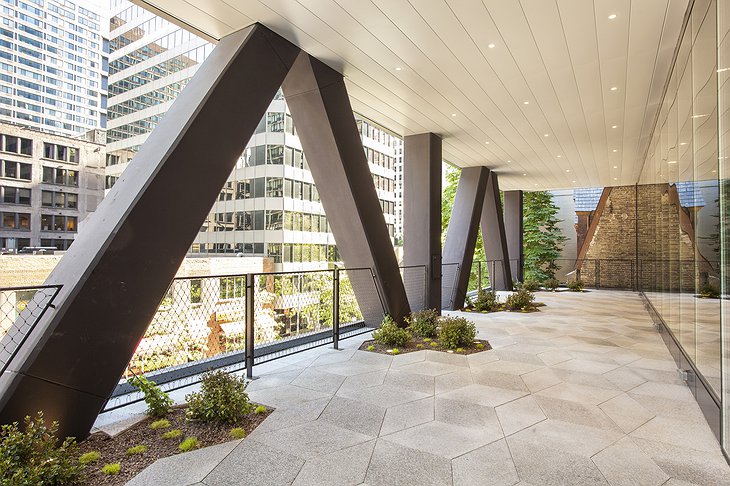