Volcano House hotel is located across Crater Rim Drive at the caldera's edge in the Hawaii Volcanoes National Park. At the heart of the park are the Kīlauea and Mauna Loa active volcanoes. Since Volcano House's opening, many eruptions have taken place. Most recently from 2008 to 2018 and then again in 2020. The fortunate guests of the inn were able to experience the rare and magnificent sight of a lava lake in Halema'uma'u's Crater.

The legacy of Volcano House hotel goes back to 1846 when a native-style four-walled thatched shelter was constructed by its owners. The price was a dollar a night, which reflected the basic accommodation's comfort level. Fast forward to 1940, the next generation of Volcano House has burnt to the ground. You would expect a gruesome story about the hotel buried under molten lava, but it was something much more trivial. A kitchen fire raged out of control and destroyed the entire building. It took only a year to rebuild the hotel from its ashes and to open it for business again.

During its 170 year existence, the historical inn hosted many famous people. Most notably: Dwight D. Eisenhower, Harry S. Truman, John F. Kennedy, and Richard M. Nixon. Needless to say, the hotel is open to all guests, offering a unique glance into the fascinating life of volcanoes. Volcano House sits at 3,750 feet (1,143 meters) elevation; consequently, its equipped with cozy fireplaces for the unusually chilly nights by Hawaii standards.

Volcano House is the only hotel located within Hawaii Volcanoes National Park. 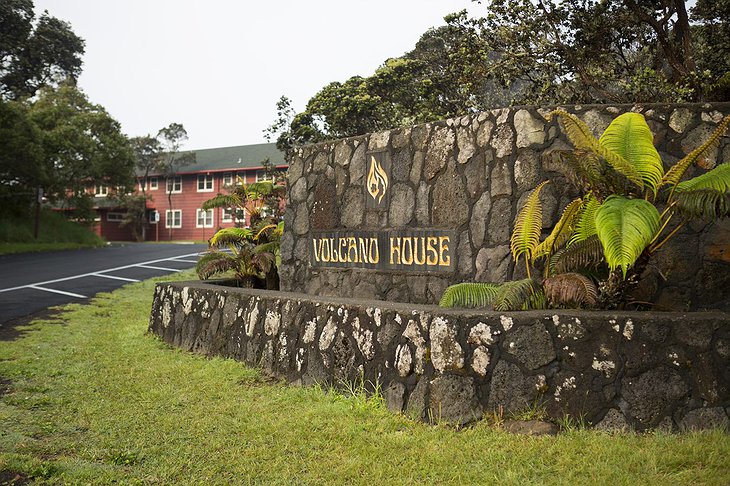 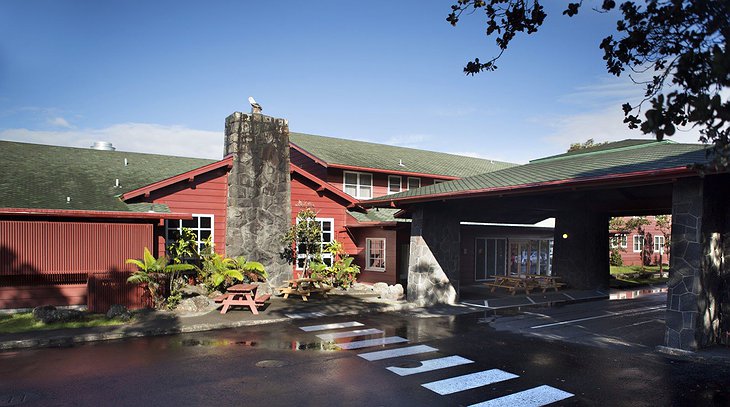 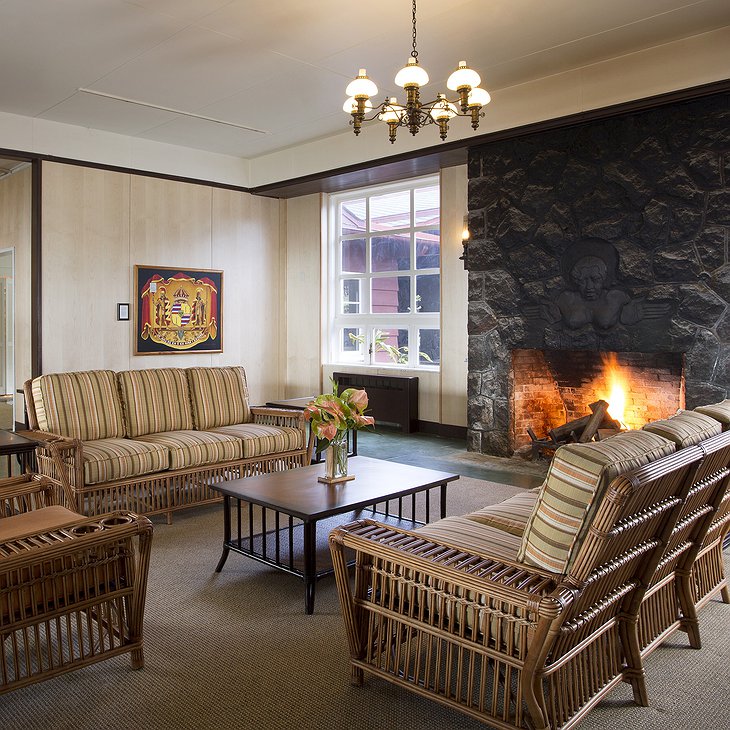 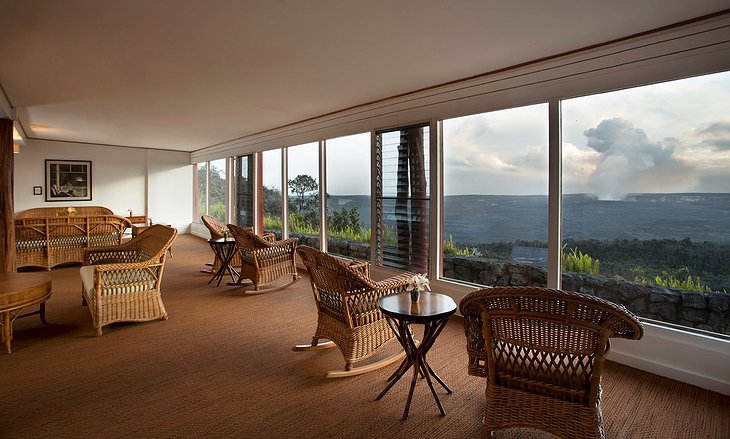 The hotel's most emblematic area is The Rim at Volcano House, which looks across the awe-inspiring Kilauea caldera and the billowing Halema'uma'u Crater. It serves freshly caught fish, grass-fed beef, and vegetable dishes while a local band plays live music. And if you prefer to have a cocktail along with the fantastic views, then Uncle George's Lounge can satisfy your thirst for both. 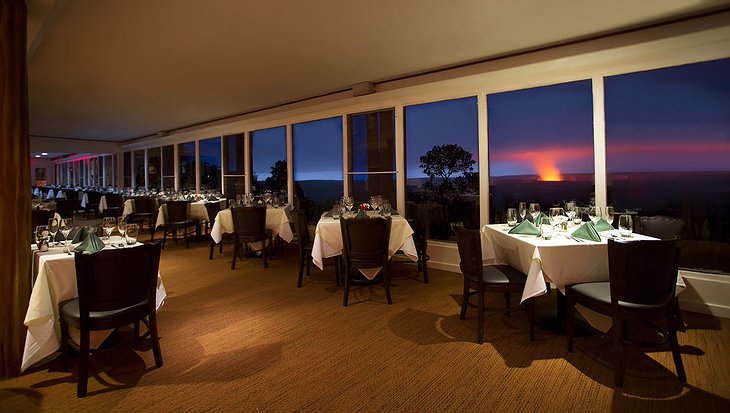 Walking down the glass hallway leads to the annex guest rooms. 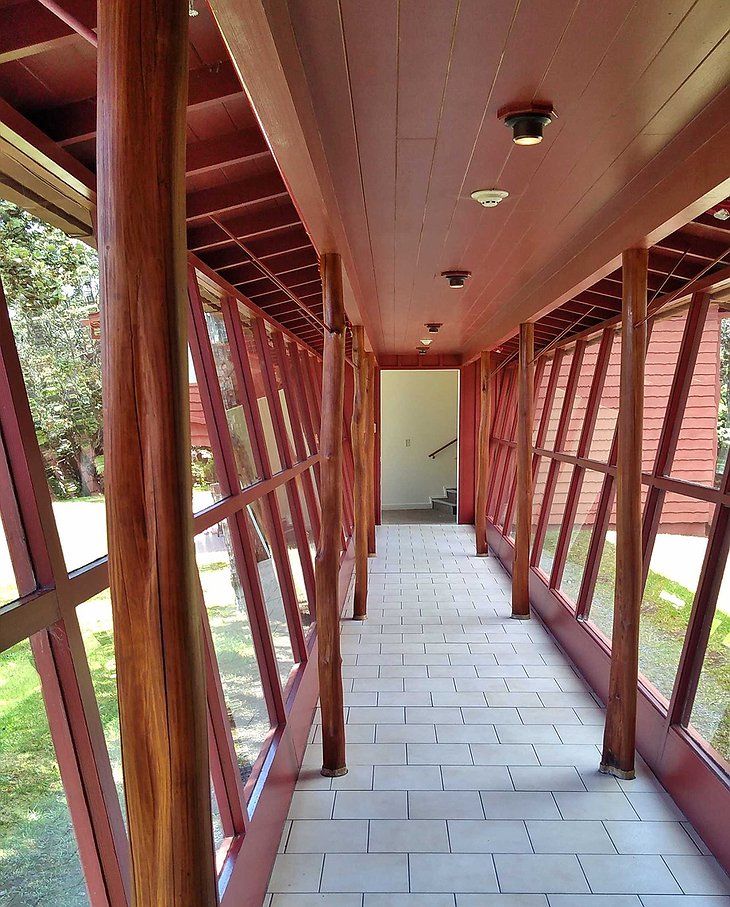 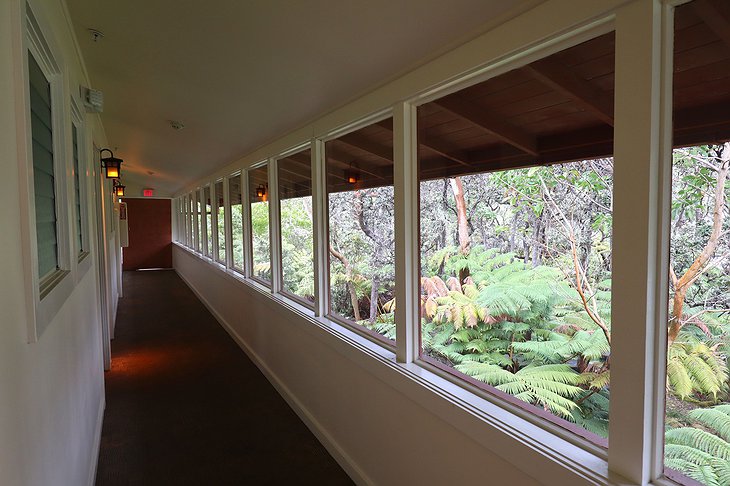 The historical retreat accommodates guests in 33 rooms, ten cabins, and 16 campsites in the nearby Namakanipaio Campground. 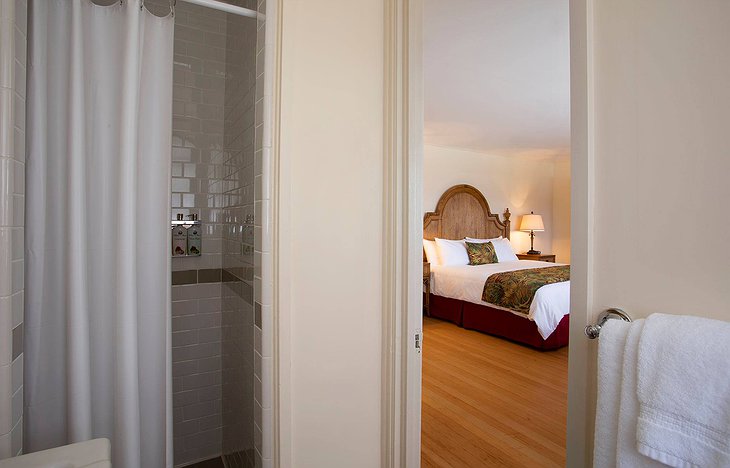 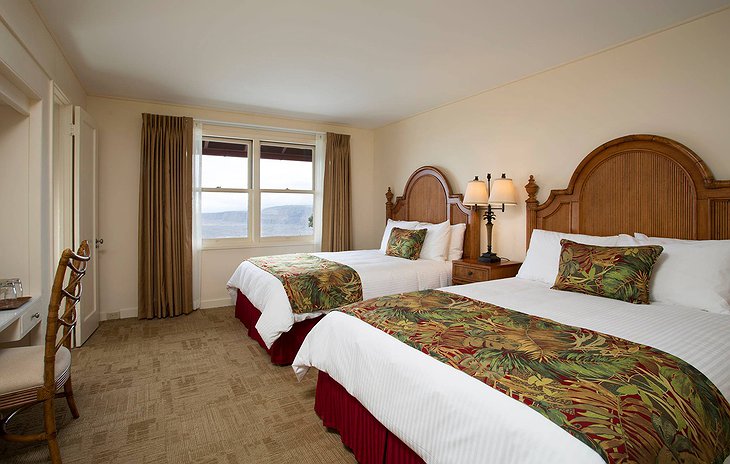 Moreover, you can choose between tropical rainforest view and volcano crater view rooms. 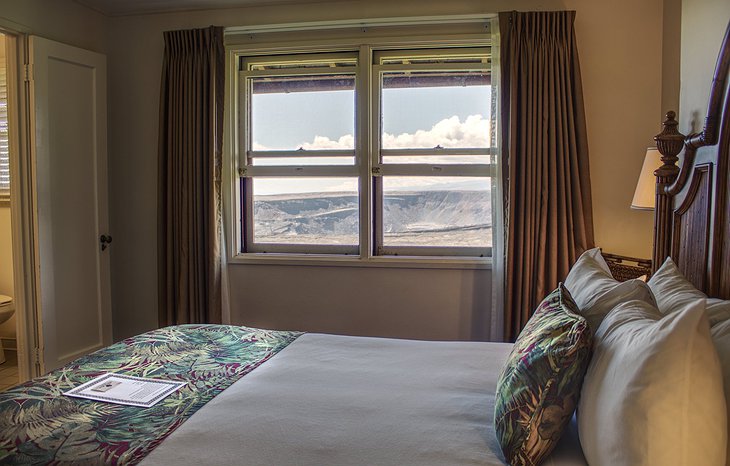 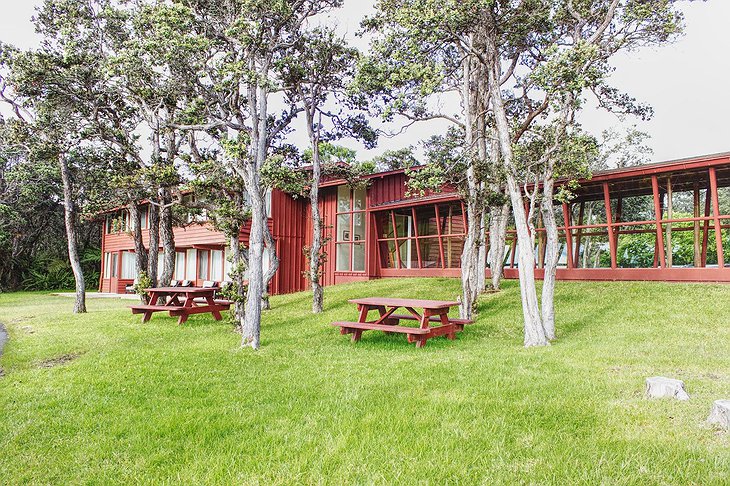 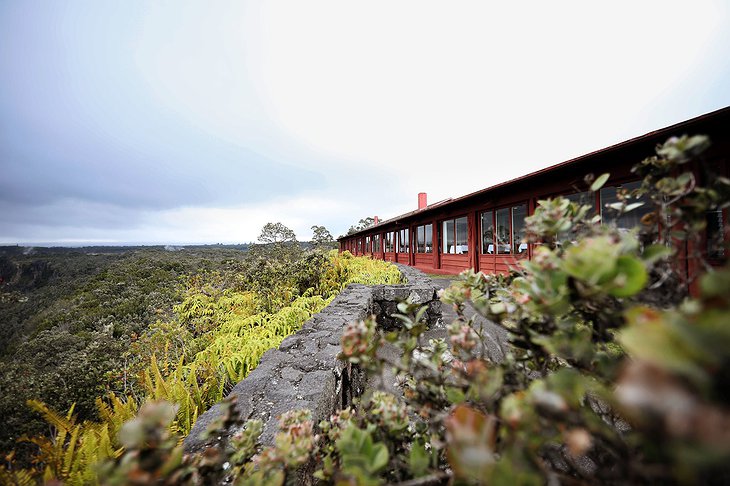 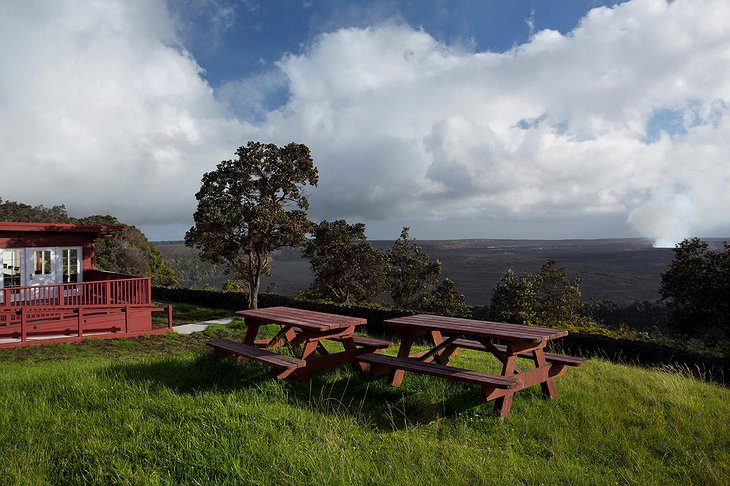 Snow, moon, and plume in the Hawaii Volcanoes National Park. 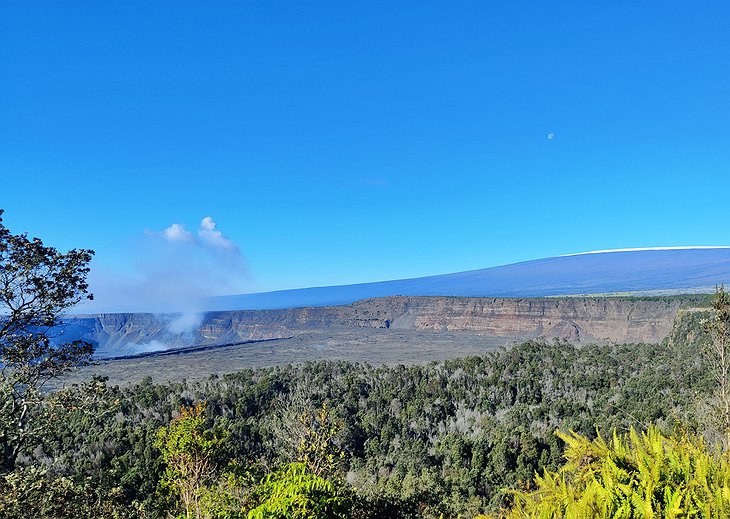 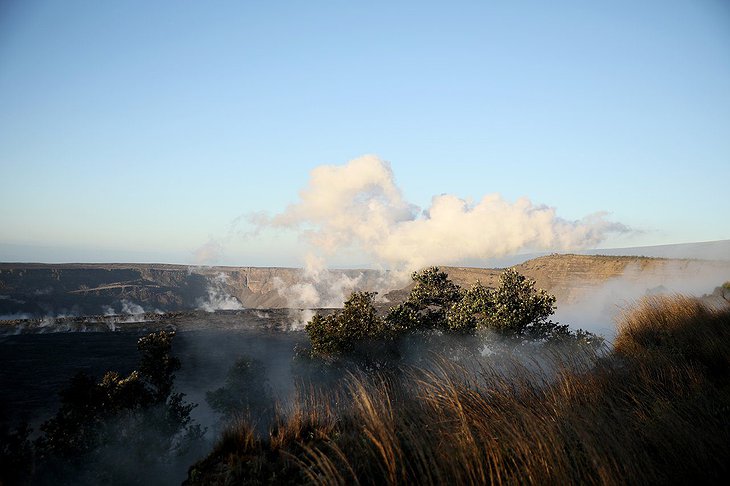 The glow from the lava lake in the Halemaʻumaʻu pit crater. 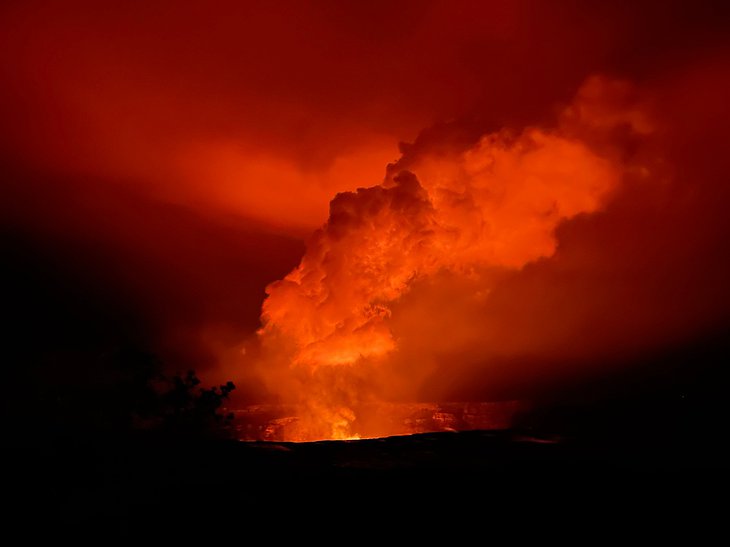 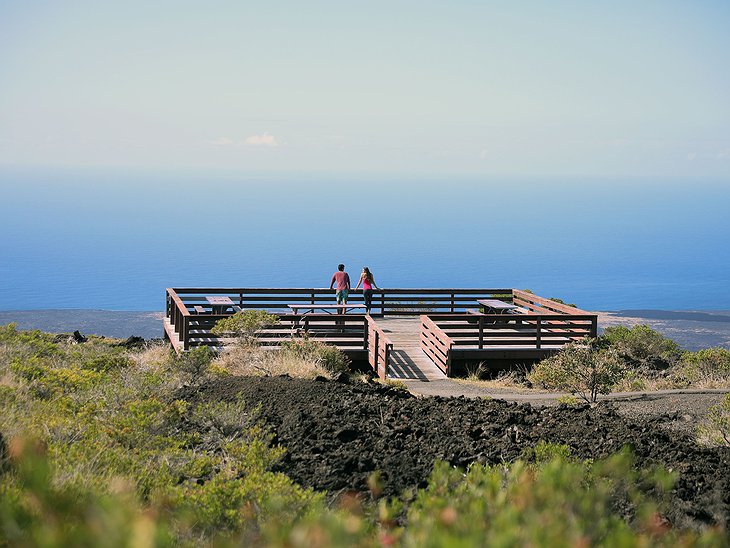