Opened in 1928, Beverly Wilshire has been popular with celebrities for almost a century now, thanks to its popular location at Rodeo Drive, Beverly Hills.

It hosted President Barack Obama, Elvis Presley, John Lennon, and many more distinguished guests, some of whom were fictional.

It was here that the characters from Pretty Woman, played by Richard Gere and Julia Roberts, fell head over heels for each other.

You can even follow the footsteps of the film’s Vivian Ward with a “Pretty Woman For a Day” package. It recreates the highlights from the iconic love story in style, starting with private shopping on Rodeo Drive and ending with a romantic dinner for two.

Beverly Wilshire is proud of its signature over-the-top luxury, and that's exactly what you should be coming here for. Over the decades, US presidents and celebrities have enjoyed the hotel's extravagance. 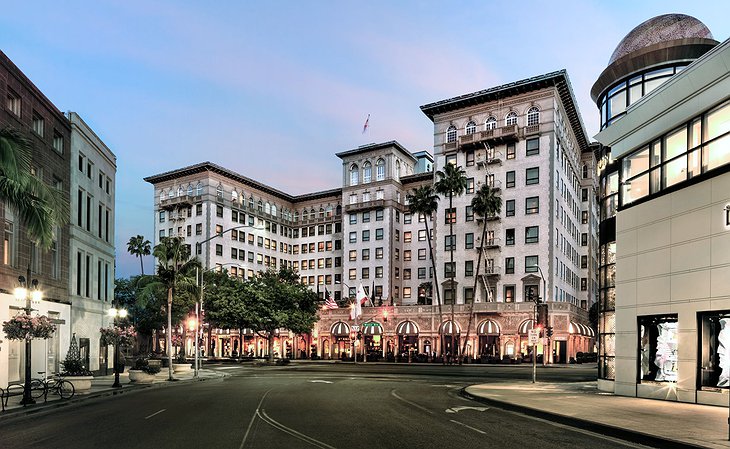 Nothing happens in moderation at this hotel. From the dainty façade of the Renaissance Revival building, through cascading crystal chandeliers that seem to be everywhere, to the Italian-style pool, this is Hollywood glamour at its best.

The "E"-shaped building is made of Tuscan stone and Carrara marble. 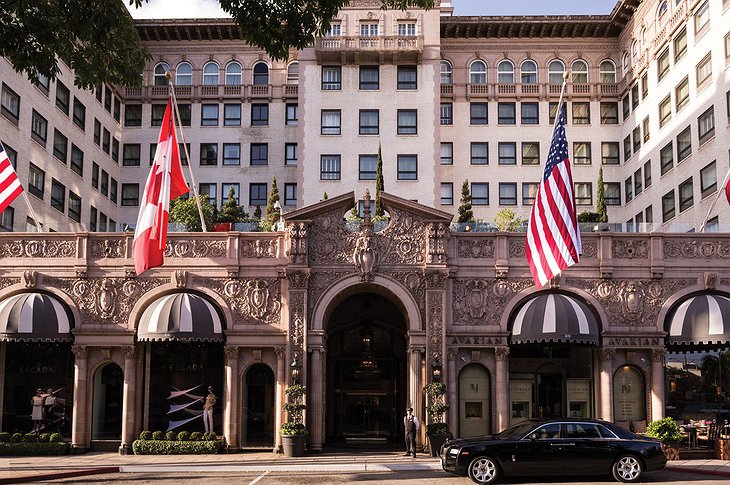 So come to indulge, and don’t look at your bank statement afterward. 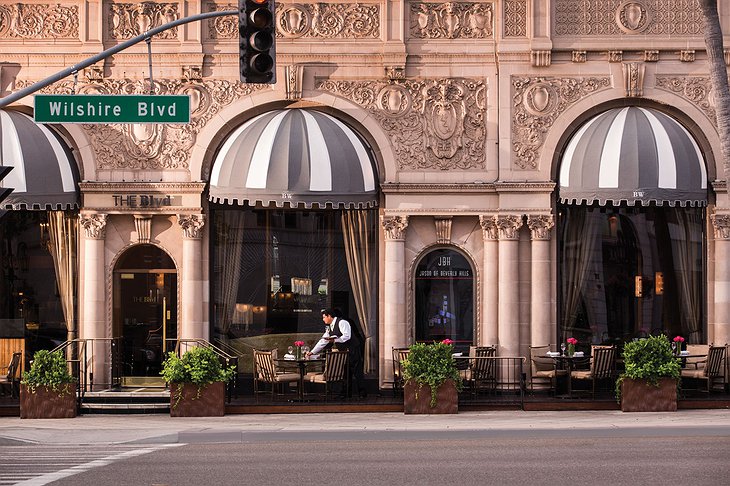 Beverly Wilshire Hotel was used numerous times as the shooting location for films and television series. One of the notable of them is the 1990 classic movie Pretty Woman, with Richard Gere and Julia Roberts.

Although, many of the interior scenes were shot at the nearby Ambassador Hotel, which was sadly demolished in 2008. 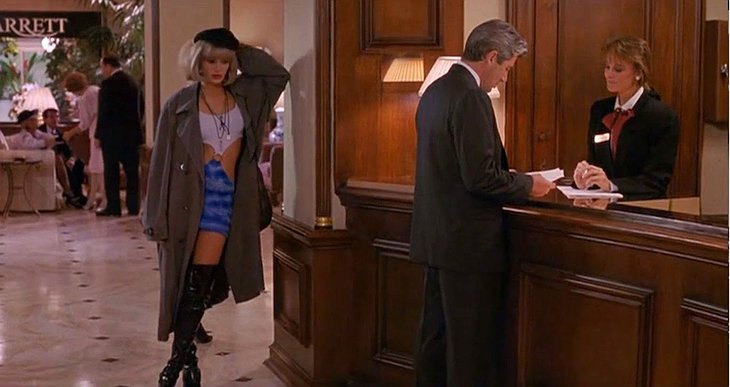 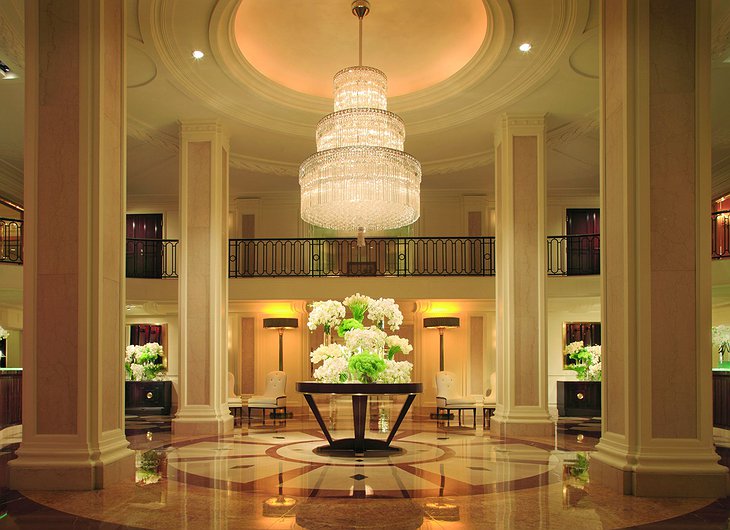 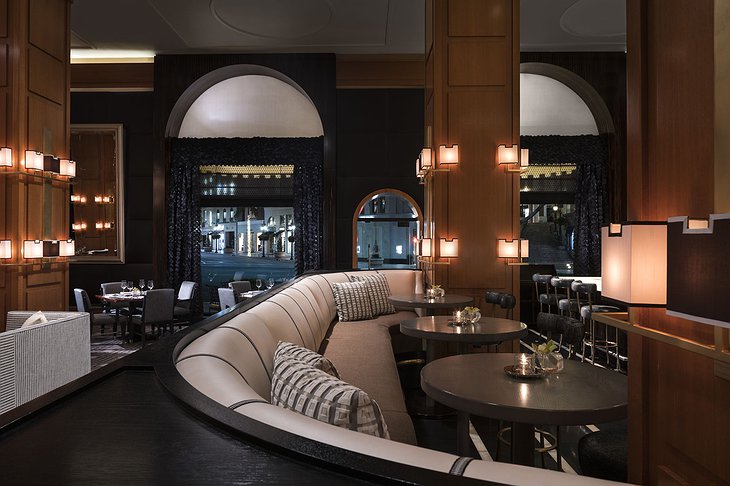 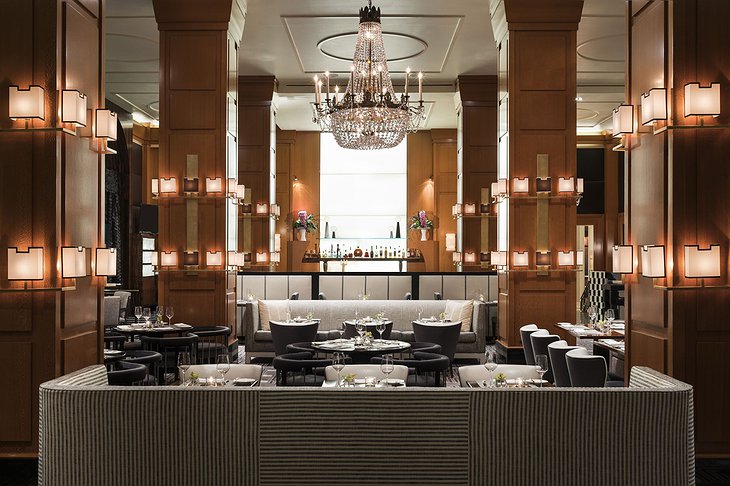 The hotel's o CUT by Wolfgang Puck restaurant, which opened in 2006, was awarded a Michelin star. 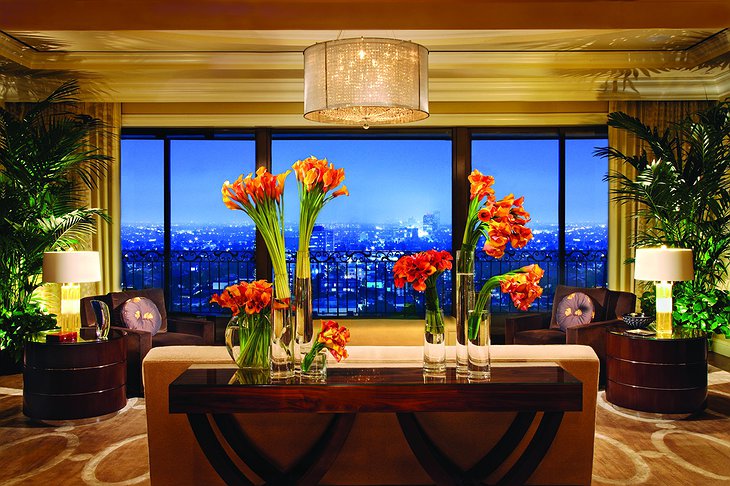 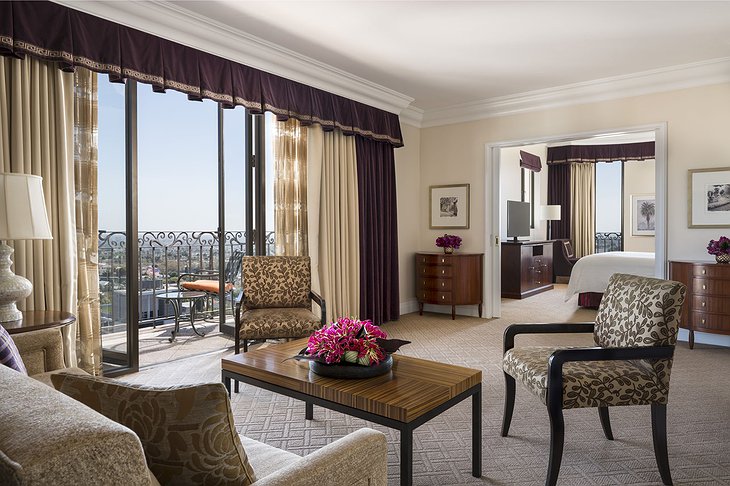 The 395 rooms and suites range from spacious studios with baths and ascend through many levels of luxury all the way to presidential suites. 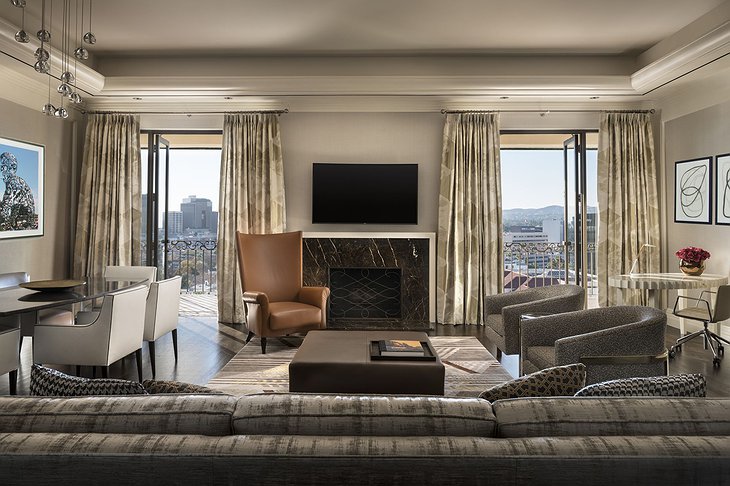 If you want something slightly different, go for the Veranda Suite. 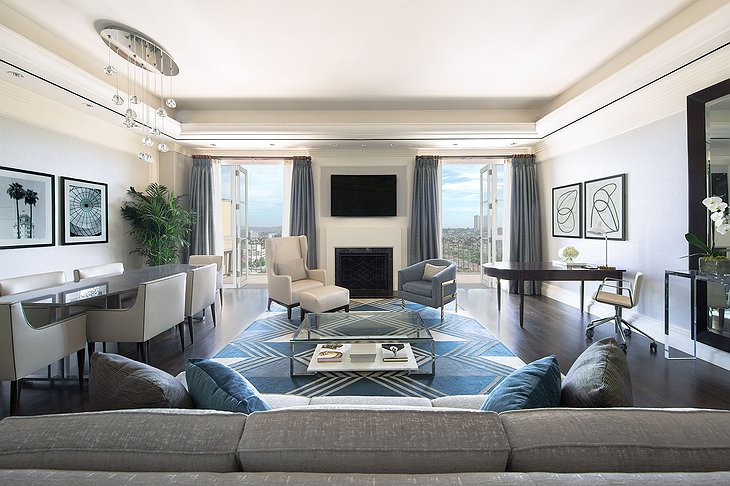 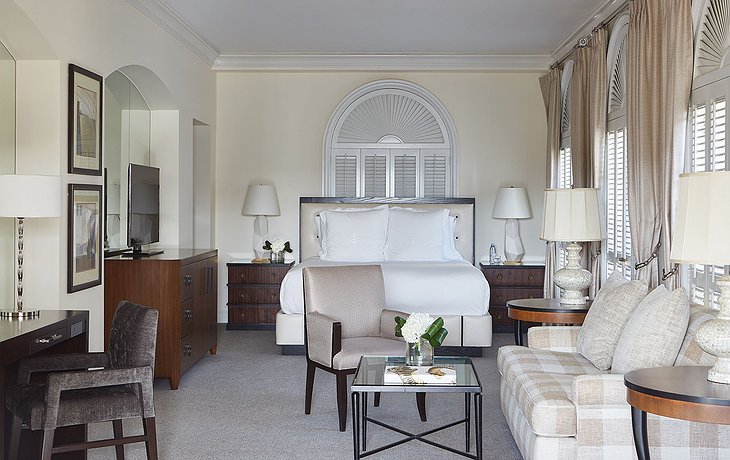 In the 1940s, an Olympic-sized swimming pool was built, and today you will find a luxurious spa with mosaic-laden steam rooms. 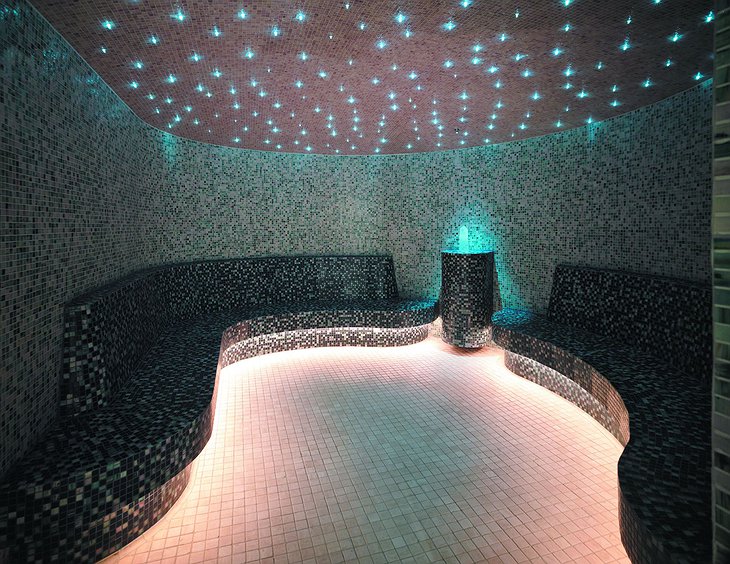 The Veranda Suite has one of the most impressive private terraces in Beverly Hills.

In addition to Beverly Wilshire's usual luxury, you also get a private rooftop terrace on the 10th floor furnished with a very picturesque glamping tent. 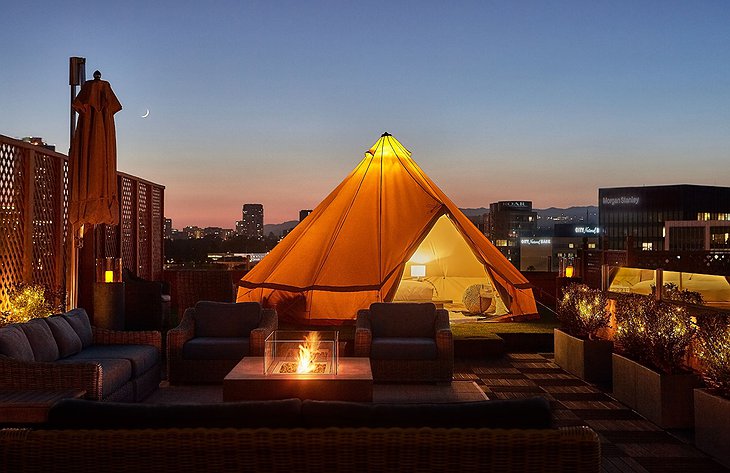 And guess what? Of course, there’s a crystal chandelier in the tent too. 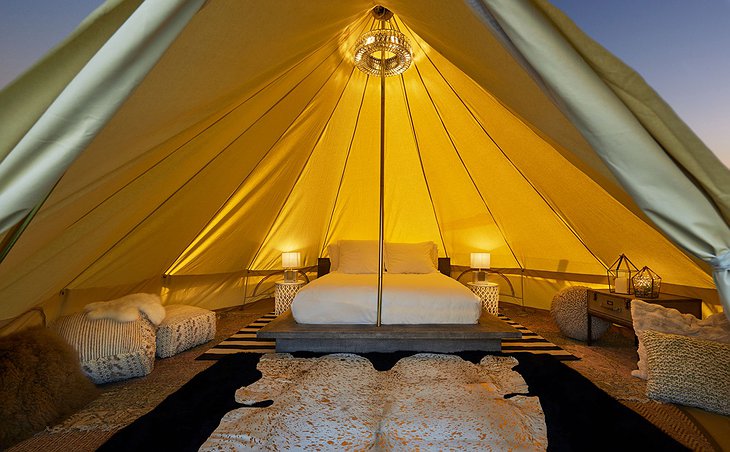 The Mediterranean-style outdoor pool is surrounded by lush greenery and stylish sun loungers. 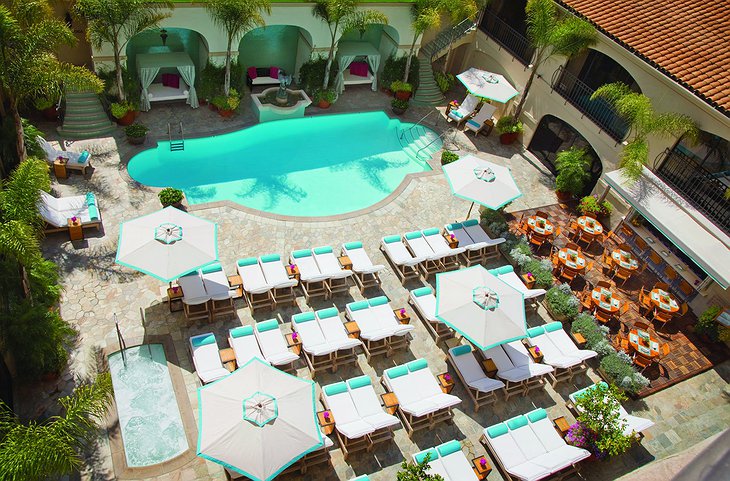