Disney is synonymous with the sparkle in children's eyes. The one that lights up when they watch one of their iconic fairy tales or a surprise visit to a Disney theme park.

Since Disney acquired the Star Wars brand, there has been a growing demand and expectation for some next-level real-life action. And finally, they have delivered.

The newest experience is located near Disney’s Hollywood Studios.

The Galactic Starcruiser promises to immerse you on a two-day journey in the Star Wars universe on an interactive spaceship.

A centuries-old cave in Tunisia was a filming location for Star Wars Episode IV: A New Hope. Later the owners of the Berber refugee decided to open the Sidi Driss Hotel.

Lars's homestead was converted into a Star Wars-themed guesthouse where the fans could feel as if they were walking into Luke Skywalker's childhood home.

For a long time, it was the only option in the world to have an overnight experience of the Star Wars universe. Up until now. 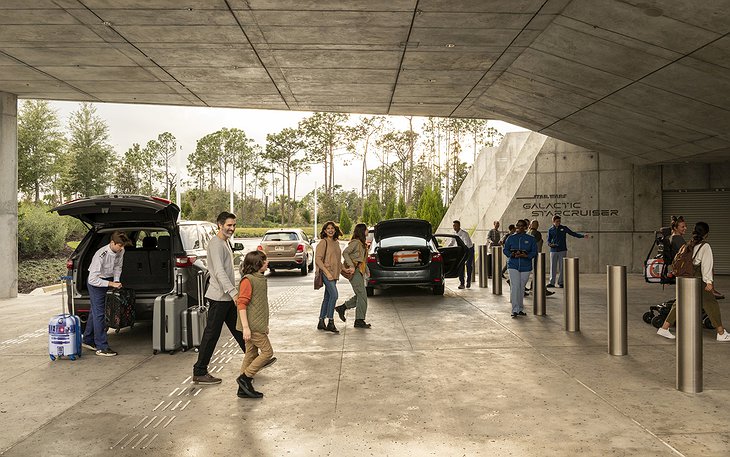 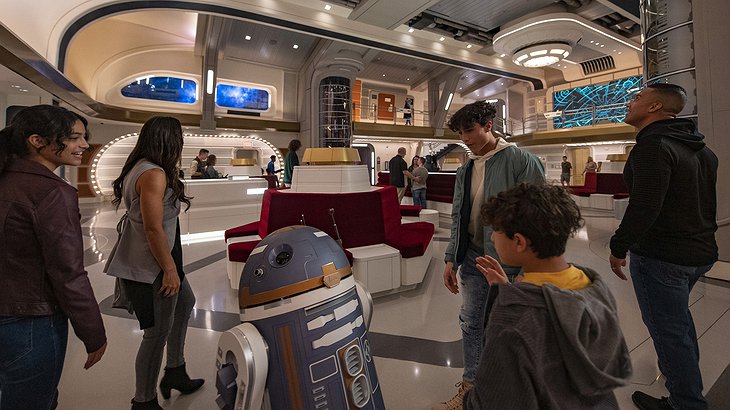 The Star Wars: Galactic Starcruiser is an action-packed two-day experience where you arrive and depart simultaneously as all the other guests. 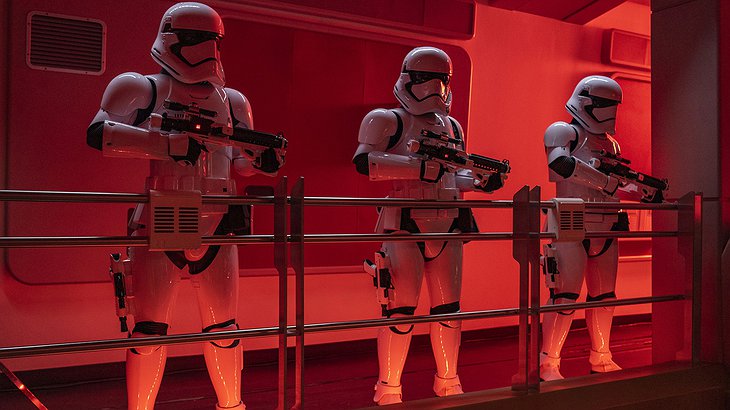 Why? Because on board the Galactic Starcruiser, you will become an interactive part of the storyline.

During your stay on the Halcyon starcruiser, you will communicate with Star Wars characters like Rey, Chewbacca, and Kylo Ren.

The outcome of your story will be based on your decisions. 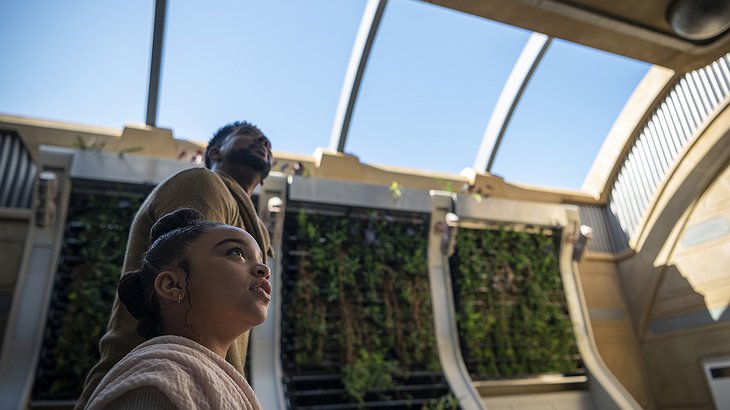 When Bob Chapek, former Chairman of Walt Disney Parks, said that the Star Wars hotel would be Disney's "most experiential concept ever", he really meant it. 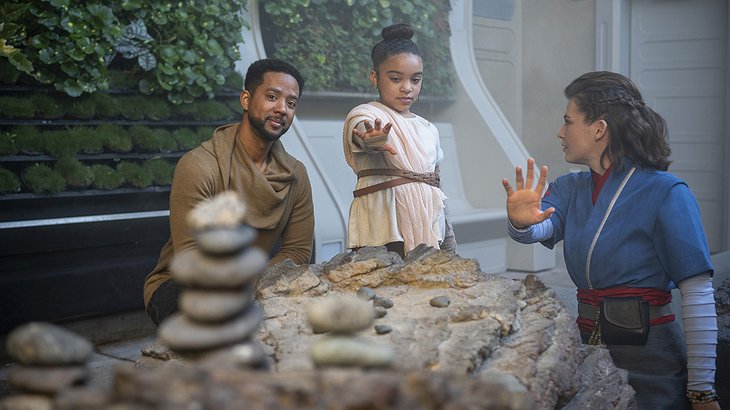 You will need to make allies, go on heists, defend the spaceship, and be asked to keep secrets. The secret missions are personalized for an authentic Star Wars world experience. 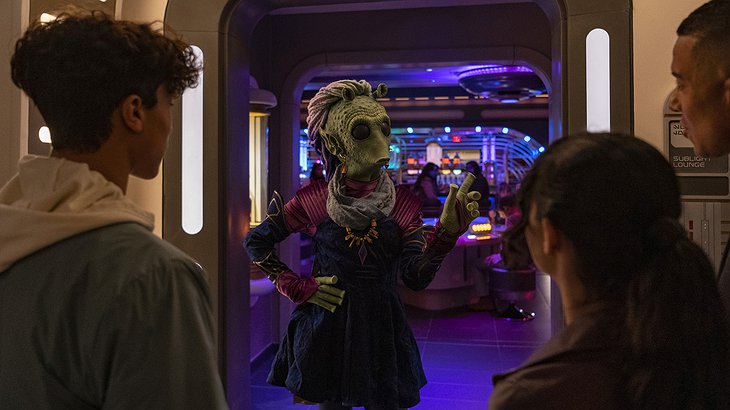 The fellow guests will be wearing Star Wars costumes, just like you, and the creatures and droids may act as the hotel's staff. 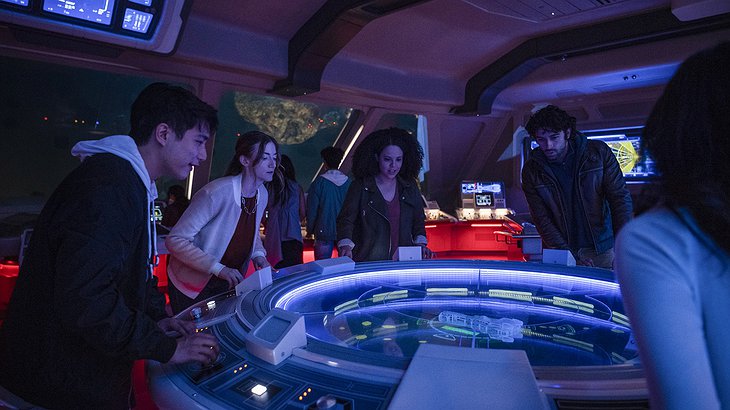 The hotel was labeled as the Westworld for Star Wars fans, and apart from bloodshed and other inappropriate elements for kids, it sums up the experience well. 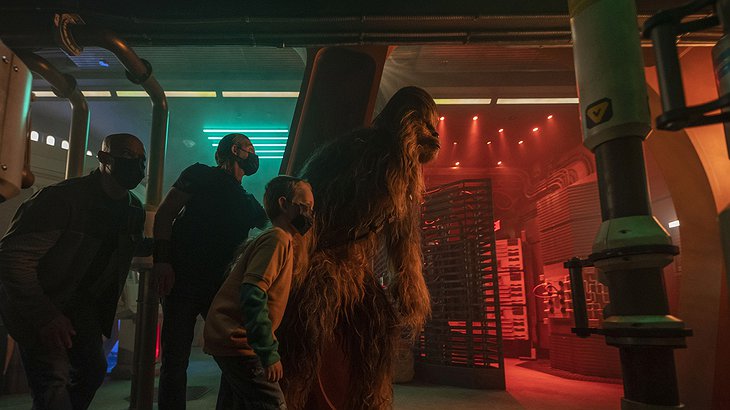 In the Sublight Lounge, you can play holo-sabacc, the hologram of the popular card game. 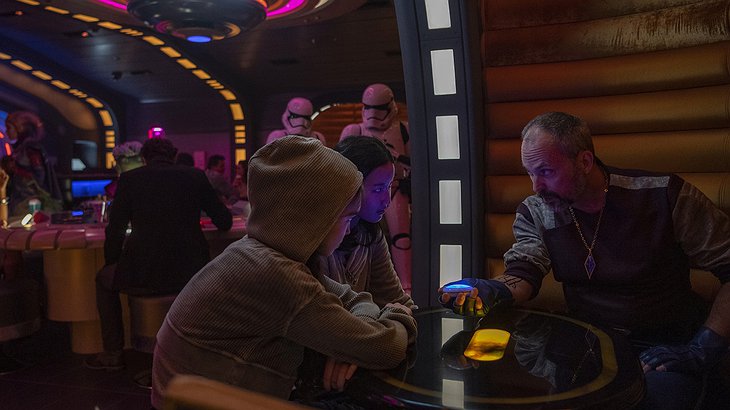 You will participate in lightsaber training and duels as part of the onboard experience. 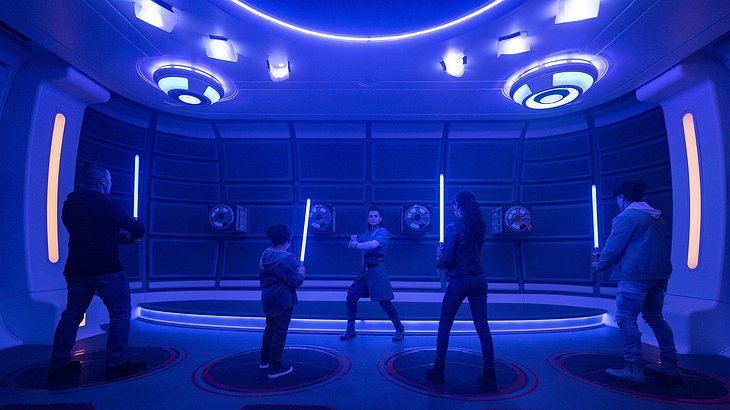 And you will also have the chance to watch the lightsaber fights of the famous characters from Star Wars. 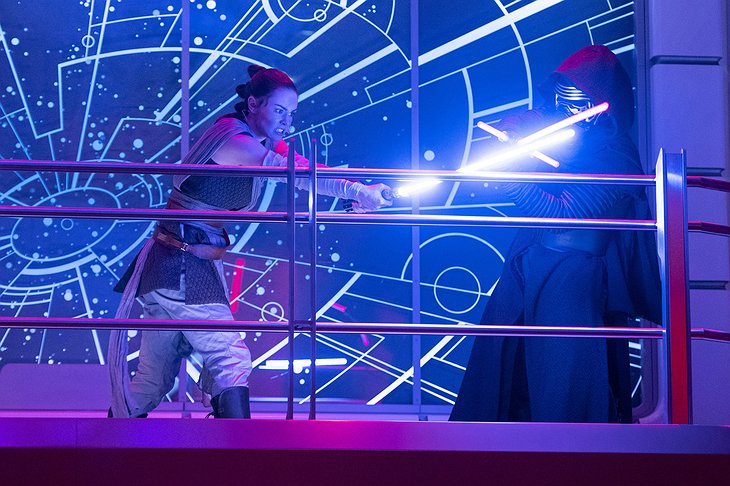 During your adventure, you will have the chance to explore and pilot the Galactic Starcruiser. 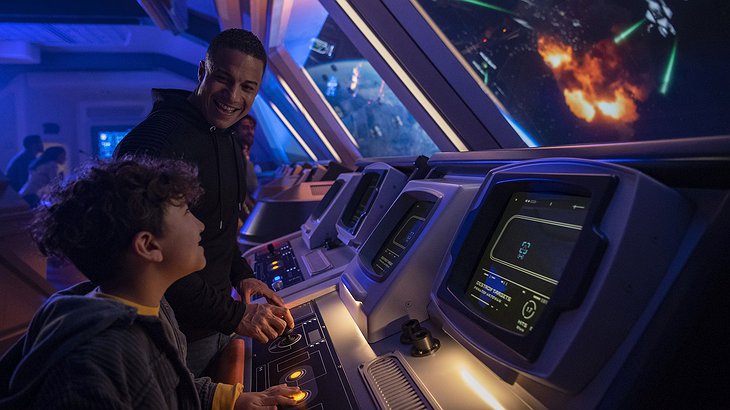 A dedicated Star Wars app (Play Disney Parks / Star Wars: Datapad) will guide you through the day's events so you won't miss any exciting activities. 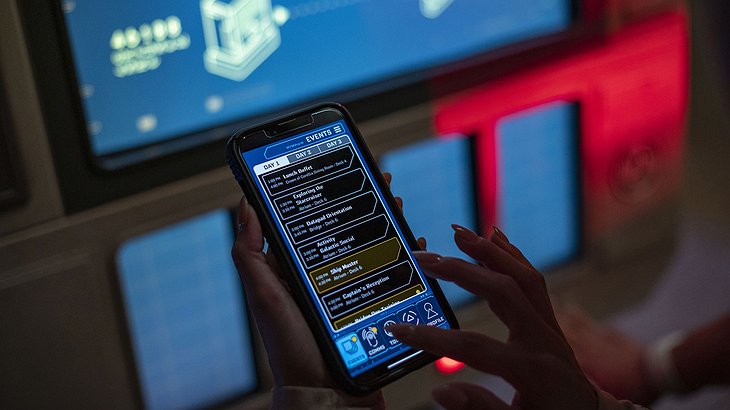 You can set the spaceship's engine to max speed and jump to hyperspace when ready. 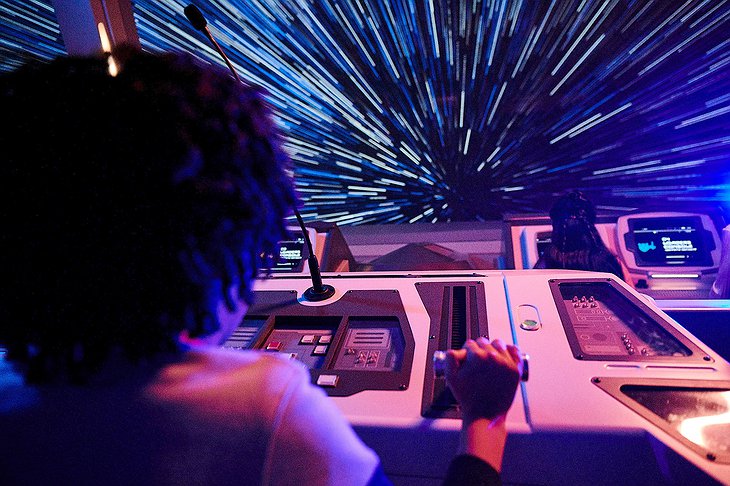 One of the biggest highlights of the Star Wars hotel's experience is the Crown of Corellia Dining
Room. 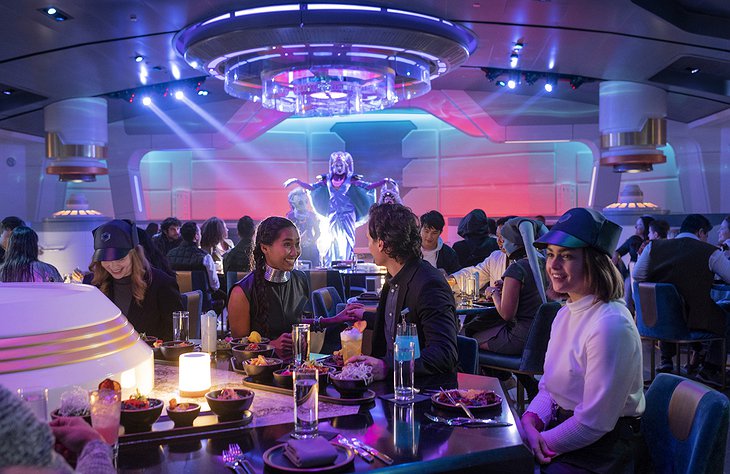 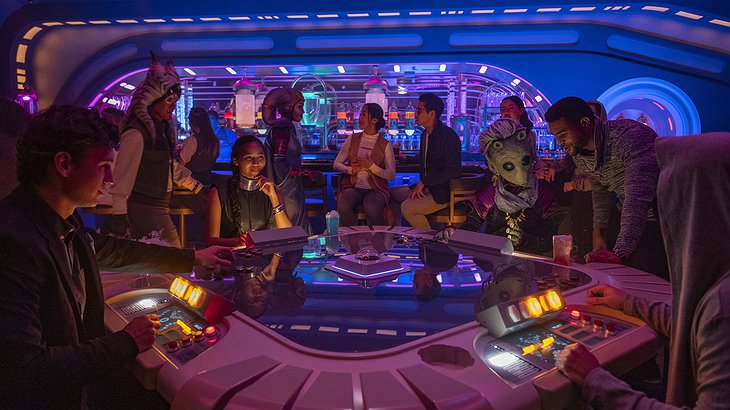 There are breakfast and lunch buffets, and the venue turns into a Michelin-star-like experience of the Star Wars universe in the evening. 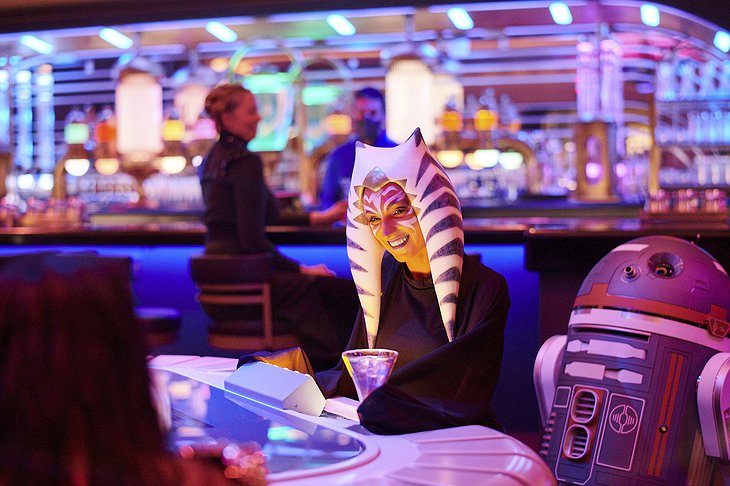 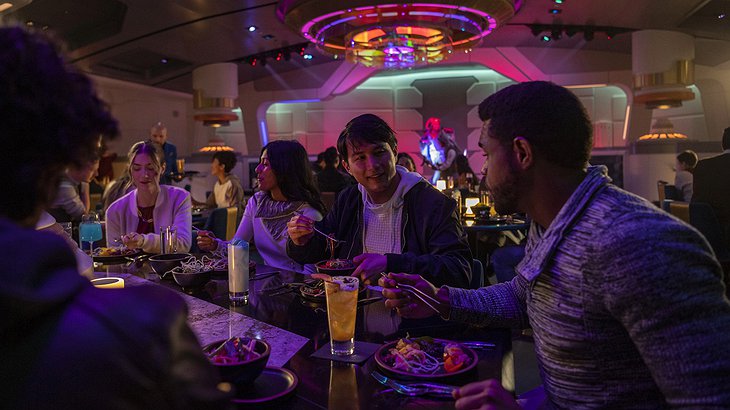 It's a gastronomical journey to afar away galaxy with foods you have never tasted before. 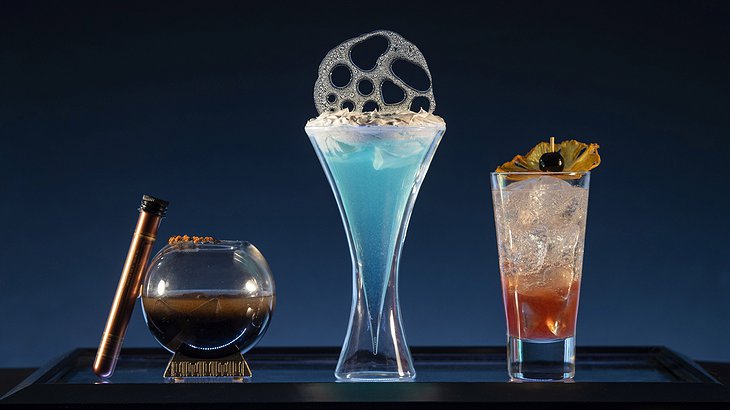 On the second day of your stay, the evening menu will be a dining experience called "Taste Around the Galaxy". Each course originates from a different planet in the Star Wars universe. 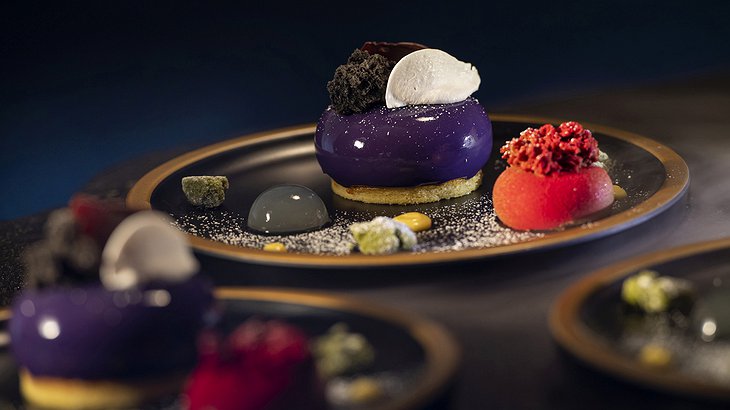 The fully authentic Star Wars rooms have full-size bunk beds and a queen-sized bed; in some rooms, there is an extra bed for a fifth person.

The window (viewport) of your room looks at the ever-changing landscape of space. 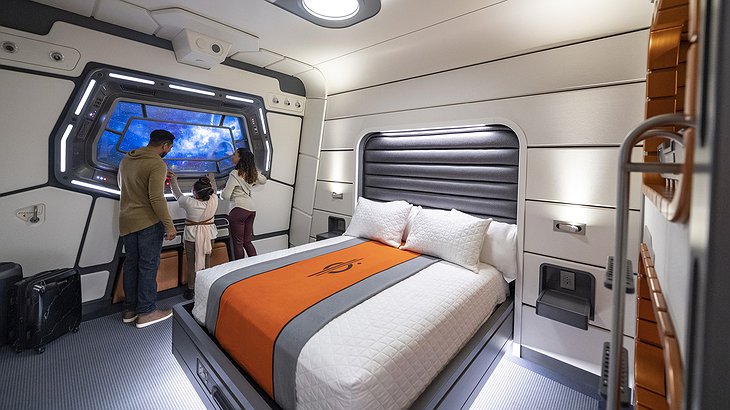 The bunk beds are shaped like a spaceship's futuristic resting place. 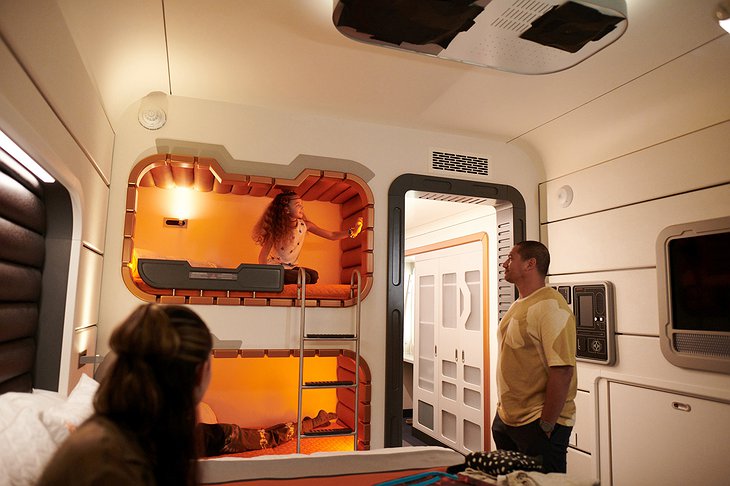 And, of course, you can buy unique Star Wars merchandise in the on-site shop before leaving. 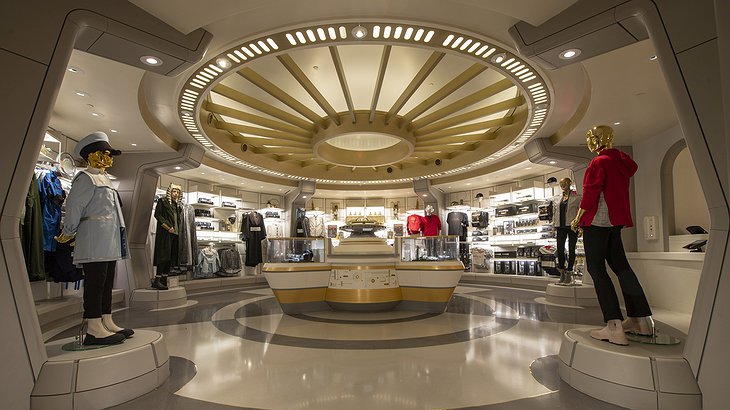