The TWA Hotel at New York's John F. Kennedy International Airport is a mecca for aviation enthusiasts, especially those who lived through the times when TWA (Trans World Airlines) prospered.

Located right next to terminal 5, the hotel gave a new life to the former TWA Flight Center, originally designed in 1962. The TWA Hotel has been open to guests since May 2019, and it's JFK Airport's first and only hotel.

In front of the main entrance are vintage cars, and upon entering, you will immediately jump into the exciting world of the 60s.

The former TWA Flight Center has added six restaurants and eight bars with the opening of the remodeled hotel, including a retro cocktail lounge called Connie, inside a Lockheed Constellation plane from 1958.

The TWA Hotel has many unique faces. But the showpiece is the rooftop Pool Bar in one of the hotel's two wings.

You can watch over the JFK platform and runways on the rooftop while enjoying a snack with a Mile High Spritz. You can also dip in the heated infinity pool while the planes take off and land behind you to complete the airport hotel experience. 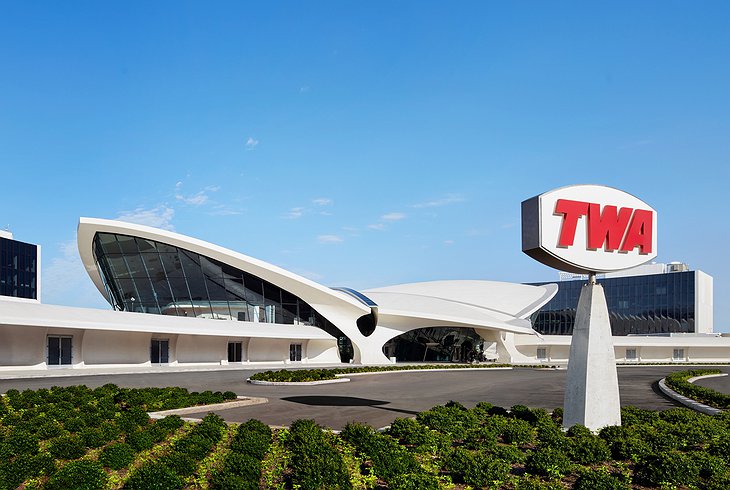 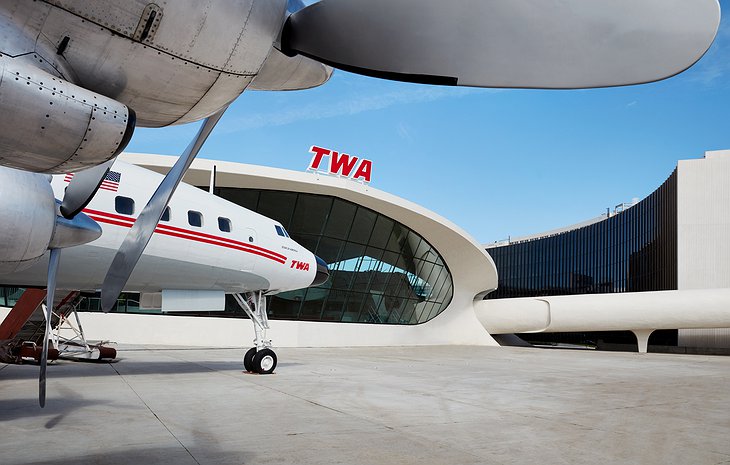 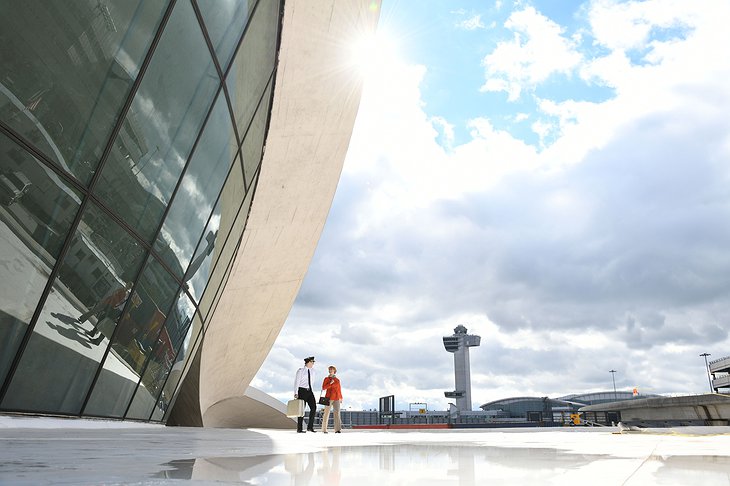 The Sunken Lounge is stocked with iconic cocktails from the 60s like the 'Vodka is My Co-Pilot'. The main decoration is a split flap departures board by Solari di Udine. 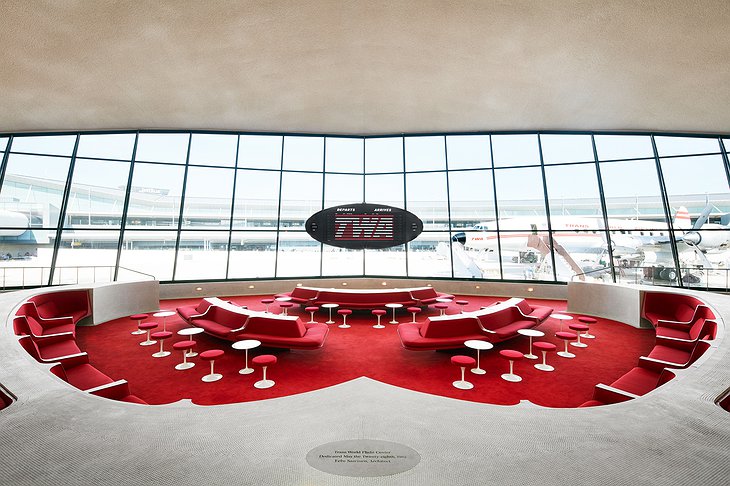 Every detail breathes aviation history. The gigantic departure boards, the furniture, and even the staff walking around, dressed in pilot and flight attendant uniforms from the 70s. Every travel enthusiast should spend a night here! 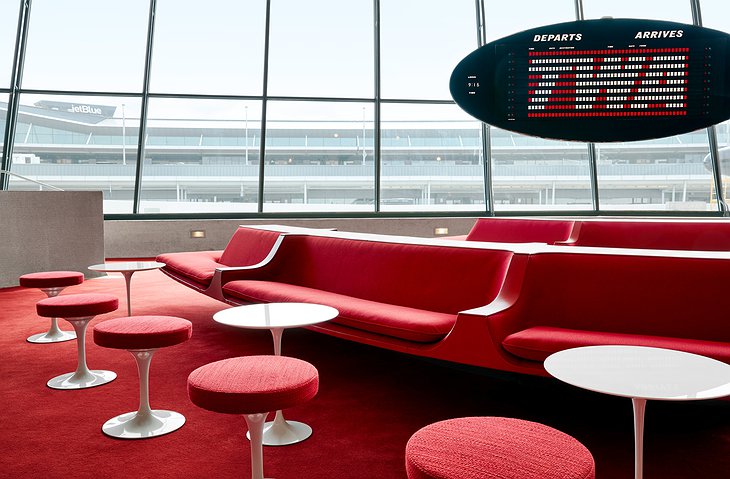 In the heart of the TWA Hotel, you will find Eero Saarinen’s grand terminal. 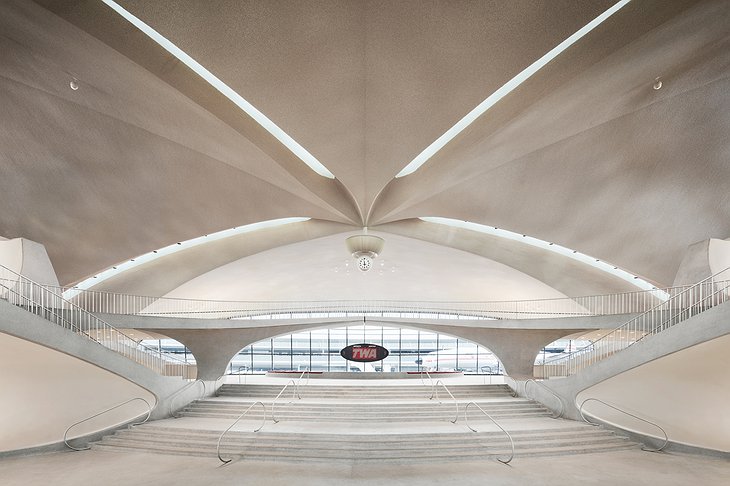 The sleek and retro-chic design makes it seem like you're back in the 60s. 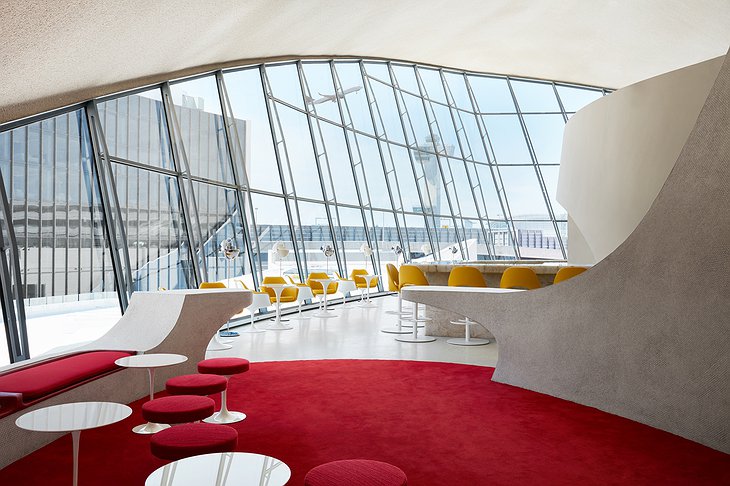 The historic Paris Café serves food and drinks all day. 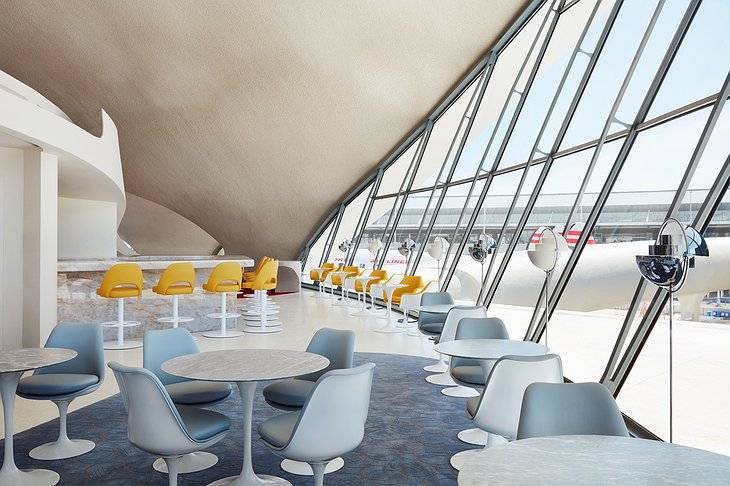 The TWA Hotel is like a museum where staying overnight is also possible. 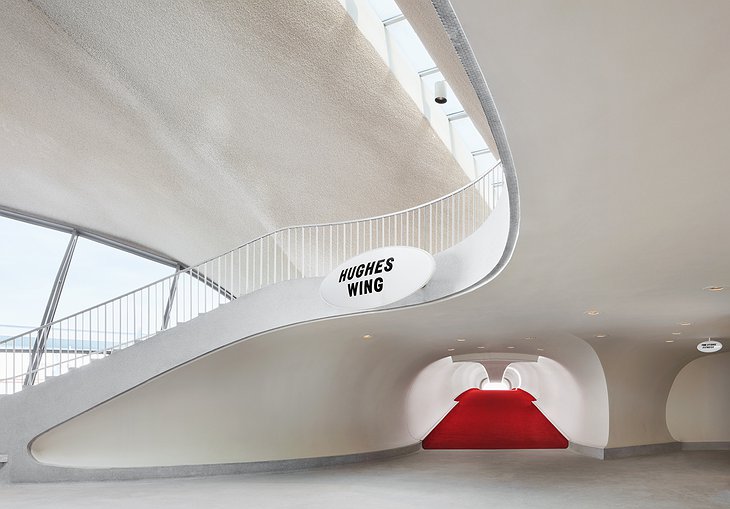 The TWA Hotel is connected to JFK's Terminal 5 via Saarinen’s iconic flight tubes. 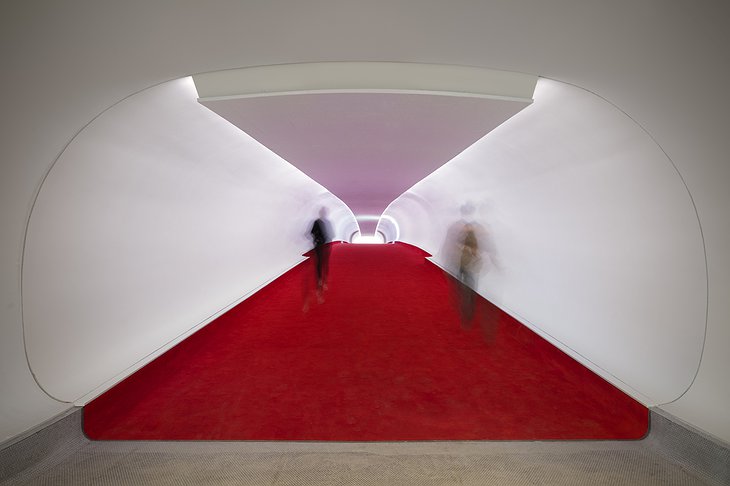 The staircase leads from The Sunken Lounge to the Lisbon Lounge area. 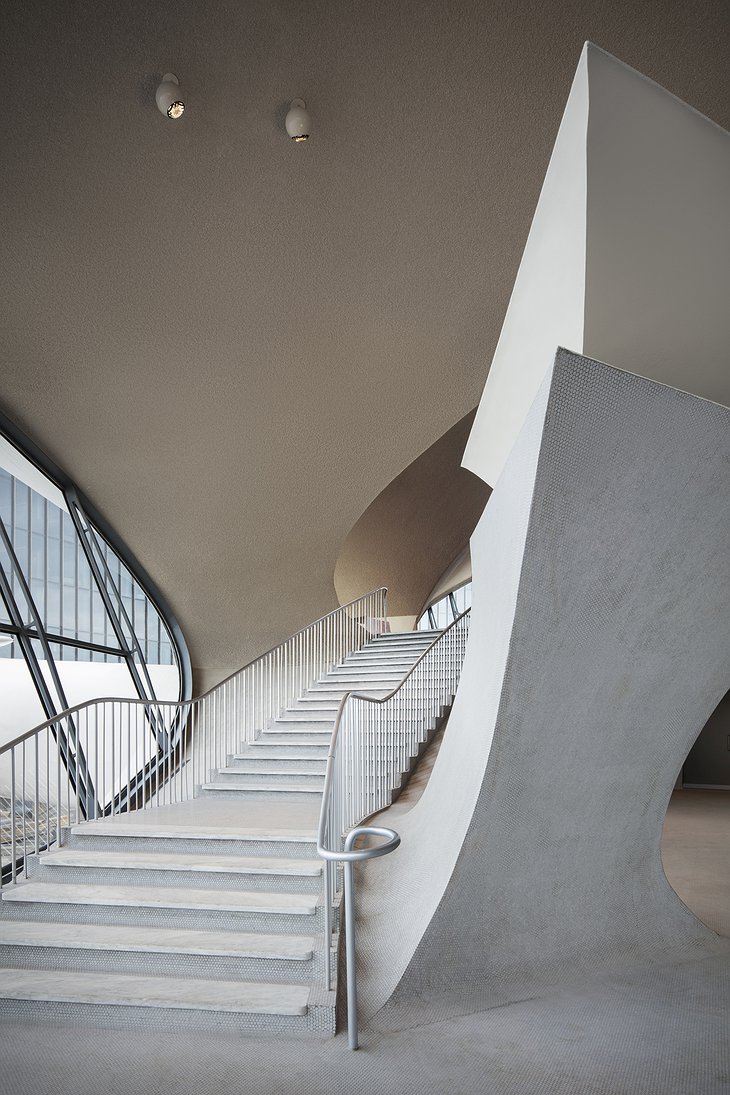 When the Pope flew with Trans World Airlines, this was his room to enjoy a bit of privacy. 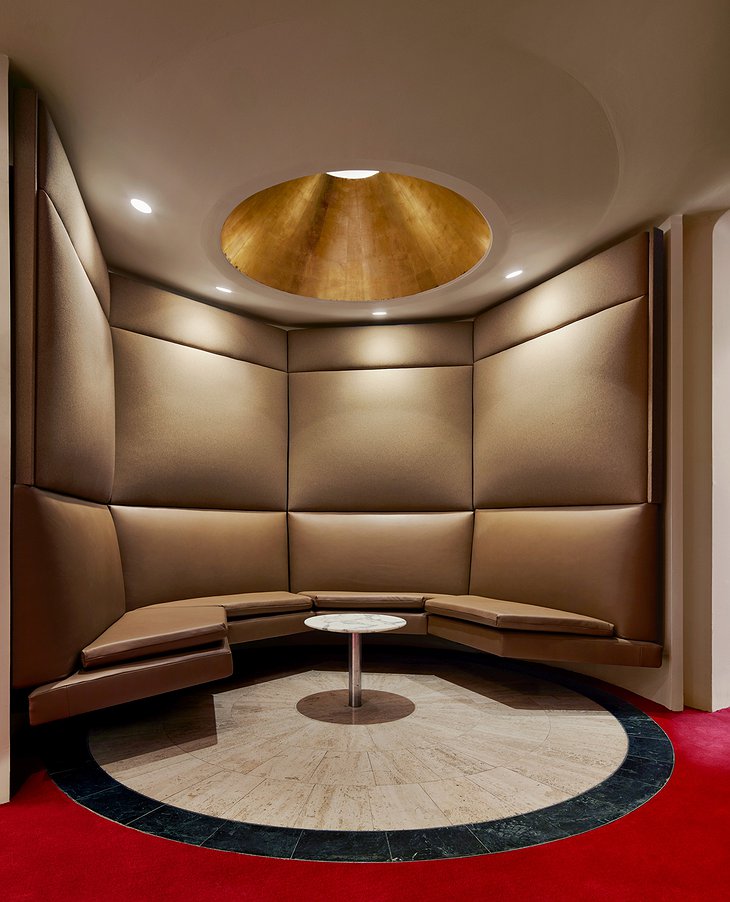 The signature red and white colors are prevalent throughout the hotel's premises. 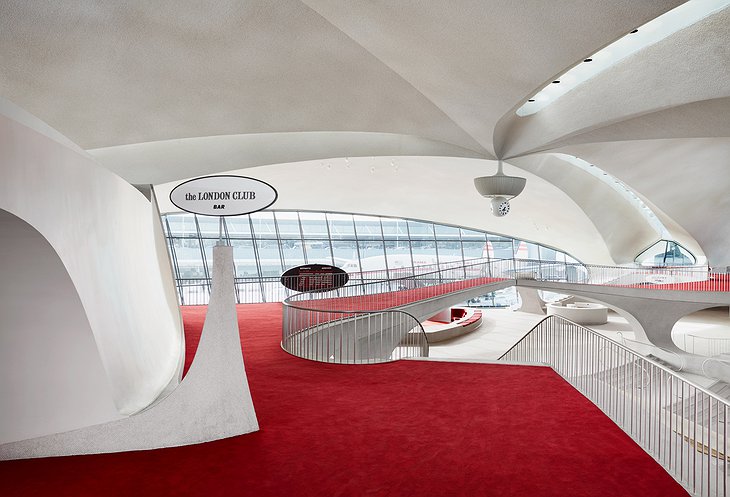 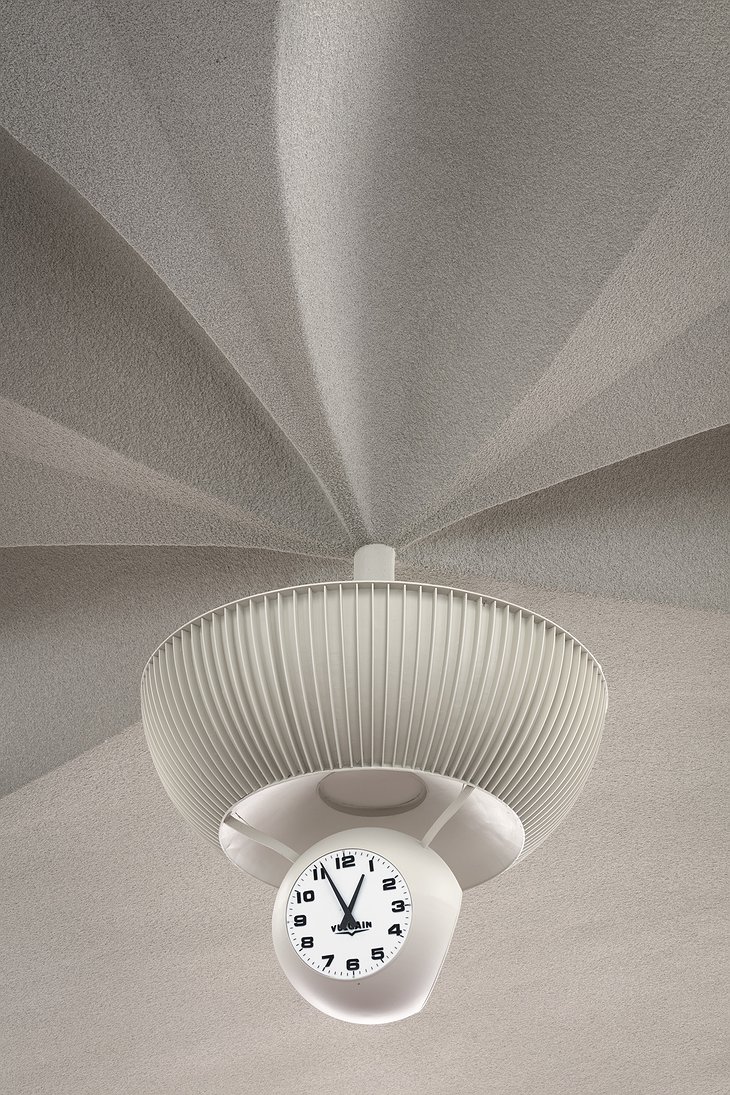 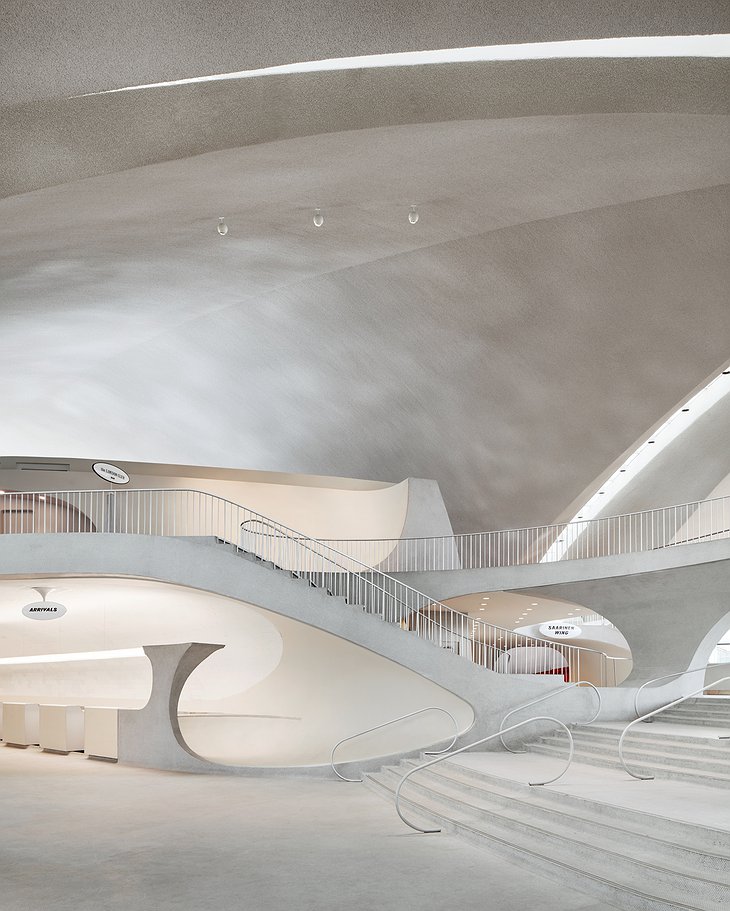 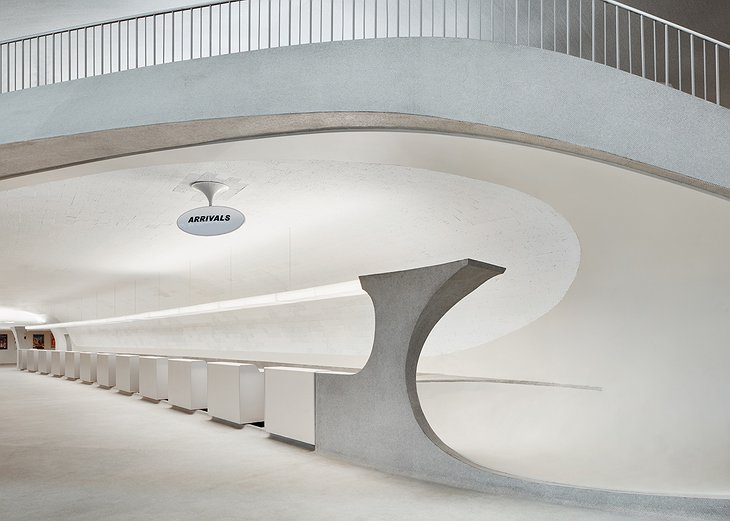 The vintage Trans World Airlines hostess uniforms are part of museum exhibitions curated by the New York Historical Society at the TWA Hotel. 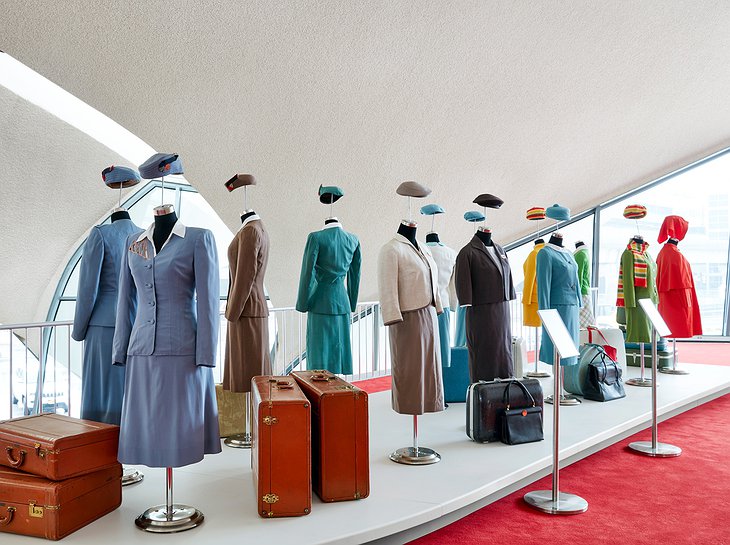 The airport hotel has 512 rooms, and although you sleep right next to the runway, you don't have to worry about noise.
All rooms have soundproof walls and windows so you can sleep like a baby on soft beds. And if you are an aviation fan, you should book a runway view room. The built-in mini cocktail bar is a nice little quirky feature in the rooms. 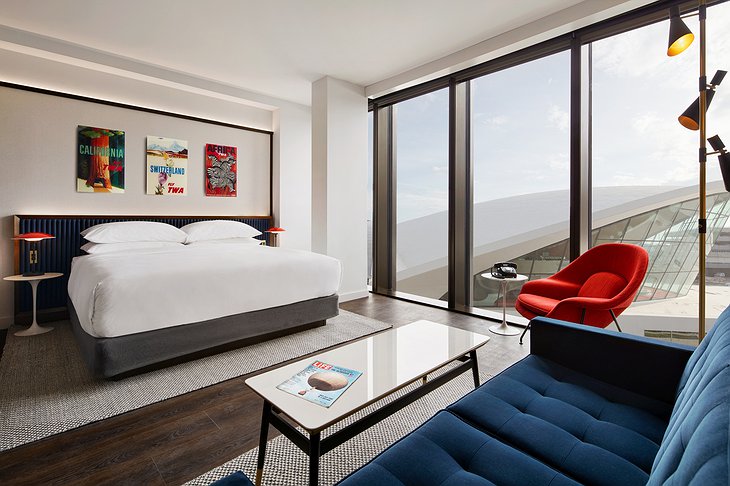 Plane spotting from the infinity pool

The nearly 65-foot (20 meters) pool overlooks one of JFK Airport's busiest runways and is open 365 days a year.

The pool-cuzzi's water is heated to a perfect 95 degrees, and there are underwater seatings to enjoy the magical sunsets while the world's largest airplanes fly by - like the double-decker Airbus A380. 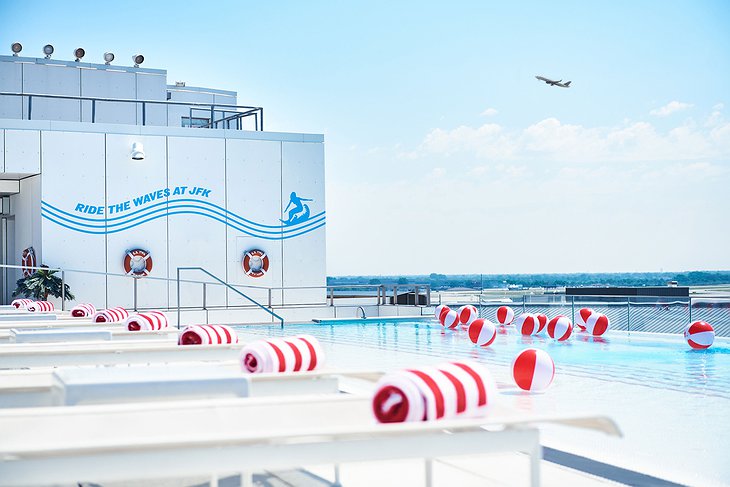 Even if you don't stay at the hotel, you can buy a day pass and enjoy the views. So if your flight is delayed by more than three hours, you are entitled to compensation according to the European regulation CE 261/2004, which will get you plenty of cash to enjoy some drinks and a dip at TWA Hotel's rooftop pool. 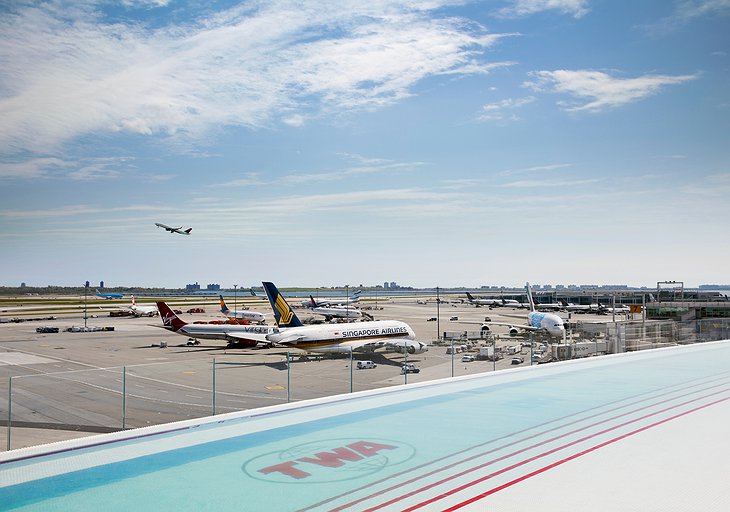 Villa Copenhagen
most popular
The Clown